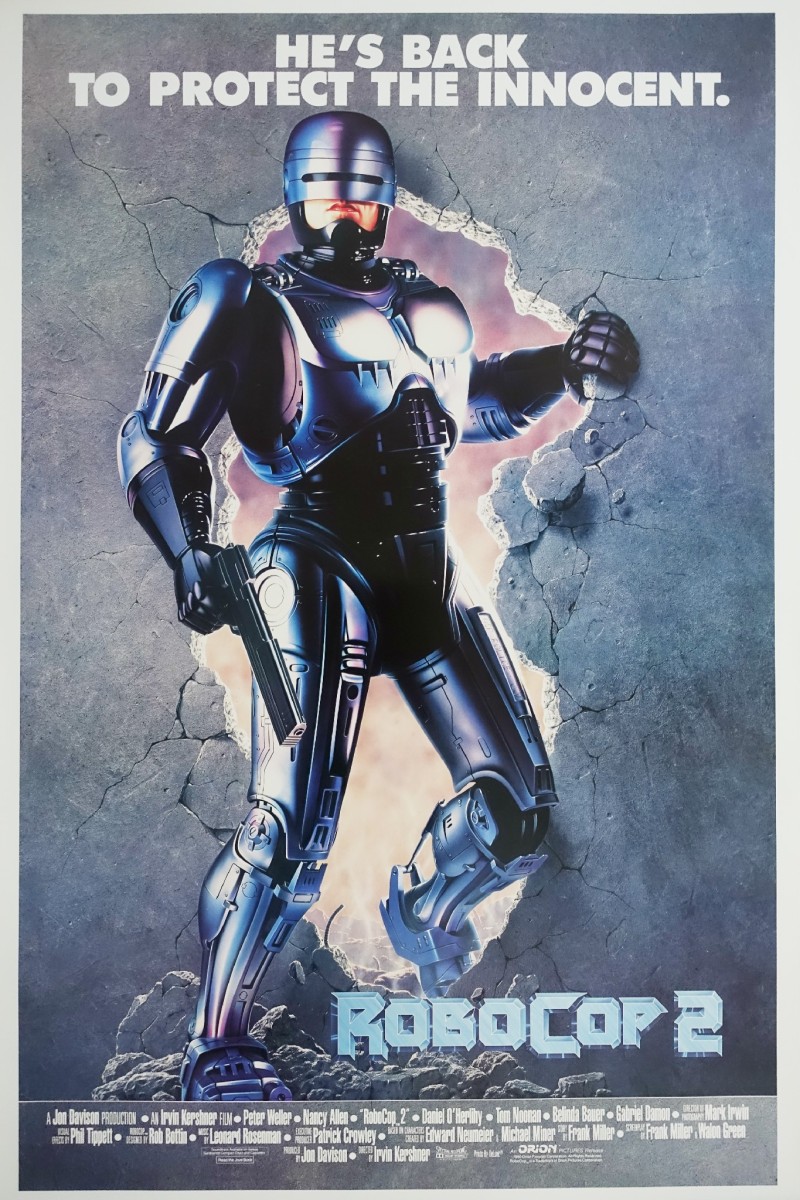 Tagline: He’s back to protect the innocent.

At the turn of 1987 the MPAA and BBFC had quite a movie on their hands. Robocop was an ultra-violent affair of dripping flesh, hardcore drug abuse and attempted rape, which although extravagantly overblown was not as far from reality as its embellishments would have you believe, as the emergence of crack cocaine saw crime rates peak in the US during the 1980s, leading to Reagan’s infamous War on Drugs and record rates of incarceration, which had more than doubled since the free love era of the 1960s. Most disconcerting was a scene in which the movie’s protagonist was systematically mutilated by a series of highly graphic shotgun blasts and the director’s overt ‘concentration on pain’. With the castration of the slasher genre still fresh in the memory following the ‘Video Nasty‘ scandal of the 1980s, it seemed only inevitable that the movie would fail to avoid censorship damnation.

It is credit to director Paul Verhoeven that Robocop was passed almost uncut, his deft, tongue-in-cheek style turning the excessive gore comic. But most of all it was his ability to clearly delineate the heroes and villains, offsetting the violence with a morality tale that overcomes the often relentless nihilism of a society without conscience. Although not in the same league as director Ivan Kershner’s most famous sequel The Empire Strikes Back, Robocop 2 stays loyal to the original in many ways, but misses in its failure to maintain that balance. The movie is violent and satirical but lacks the charm and emotional moral core of its predecessor. All facets of the movie are extreme in their own right, but they fail to simmer into a suitable concoction: the wryness lacks subtlety, the violence is needless and the social commentary often borders on the condescending. 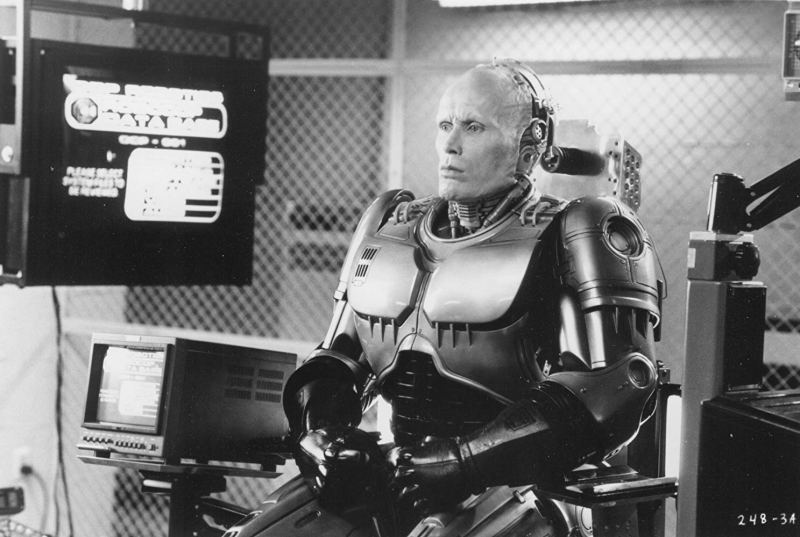 By the time Robocop 2 hit theatres, Murphy’s mechanical vigilante had become a wholly different entity. The original movie was by no means aimed at children, but one look at his shiny metal armour was all it took for inquisitive eyes to brighten, a fact that would lead to the youth-oriented debacle that was Robocop 3 as Orion Pictures got set for the scrapheap. Right or wrong, the character who had been savagely mutilated just a few years prior was fast given the cultural marketing treatment, but the commercial seeds had been sown long before. 1988 saw the release of both the Robocop animated series and arcade game, while a comic series was shipped just in time to coincide with the release of Robocop 2. It didn’t matter that those little tykes wouldn’t get to see the movie. They already had the cap-firing Robocop toy range, and were probably too busy mutilating plastic men in a dark corner. Murphy’s straight-talking law enforcer had transcended the realms of adult entertainment. Robocop’s gaudy design was too much of a visual draw for children to ignore.

In spite of its deficiencies, as a slice of action absurdity Robocop 2 is a great deal of fun, turning to a very real social problem in its attempts to match the shock factor of its antecedent. Where does one turn when looking to outdo a fictional society where gas station explosions and melting bodies are every day occurrences? How does one compete with the likes of Kurtwood Smith’s unconscionable scourge Clarence J. Boddicker? The answer: why kids, of course. The irony of this is astonishing, but with kids aged between 14 and 24 constituting the bulk of rival street gangs the Crips and the Bloods by 1980, Robocop 2 wasn’t quite as far-fetched as some would have you believe.

In a society of widespread terrorism, killer security systems and 9-year-old drug lords, a Dystopian Detroit is in debt to Omni Consumer Products after senselessly spending millions on a series of malfunctioning ED-209 defence models. With the public sector bled dry, the police are on widespread strike as the entire community turns to mindless crime, fuelled by their addiction to Nuke — a cheap, designer drug mass-produced by New Cult leader Cain. Cain is played by perennial creep Tom Noonan, a wise choice considering some of his past performances, particularly as Manhunter‘s remorseless killing machine Francis Dollarhyde, and he does an admiral job as the psycho-come-droid with a penchant for his own product, though the screenplay offers him far less than Robocop did his predecessor.

Speaking of Robocop, a loose circuit or two has turned him into a veritable stalker as he goes in search of his wife, Ellen, which doesn’t sit well with OCP once she files a lawsuit claiming the unlawful enslavement of her still-human husband. Probably realising that bedtime with a cybernetic organism would be just a little awkward, Robo plays up to the corporation’s rebuttal of his humanity, sparing his teenage son a lifetime of psychological hardship in the process. Weller has all the right moves (just look at the his successor’s difficulties in Robocop 3), and his heart is in the role that would make him, but a zany screenplay is enough to zap anyone’s credibility, and Murphy’s second bout of emotional redemption just doesn’t fit with the overall tone.

In the end, it’s better to just embrace the silliness and buckle-up for a delightfully violent affair that plays out like an edition of ultra-violent British comic Judge Dredd. Before that can happen, our marginalised rebel has to once again hit rock bottom, and creatively he’s in for a rather nasty fall. Stripped to pieces by the sadistic New Cult, Murphy is transformed into a lumbering buffoon after OCP refuse to pick up the multi-million dollar tab, wandering the streets and offering trite morality lessons to rampaging peewee criminals like Big Bird high on Valerian tea. With Robo off in la-la land, OCP’s search for the city’s second Robocop continues, and after a spate of half-dead police fail to live up to their predecessor, ruthless psychologist Dr Juliette Faxx (Bauer) turns to recruiting criminal subjects, eventually opting for deranged psychopath Cain.

With nowhere else to turn, the Mayor of Detroit cuts a furtive deal with 9-year-old New Cult leader Hob (Damon), allowing him to flood the streets with Nuke in return for clearing the city’s debts, but OCP are intent on the city’s privatisation, sending Cain’s Nuke-addicted super machine on a path of wanton destruction. Unfortunately for them, Robocop has managed to reverse the same highly-sophisticated reprogramming that baffled scientists by electrocuting himself with a 10,000 volt generator. With that kind of technical savvy, there can surely be only one winner.

After some mechanical flirting with main squeeze Angie (Görg) a Nuke-fuelled, mechanical Cain suddenly turns psychotic, gripping her head with his giant claw and snapping her spine like a toothpick. Ouch!

Stumbling upon a coach-led, little league crime spree, a newly reprogrammed Robocop is dissed by a group of miniature ballers, leading the once ruthless super-machine to deliver a wholesome morality speech of pussy-ass proportions.

They say 20 seconds in the California sun is too much these days. Not to worry! All you need is a pint of Sunblock 5000 and you’re good for at least a couple of hours. Be warned, however: frequent use WILL cause skin cancer.

After turning off a fire hydrant, a discombobulated Robo lectures a group of kids on the wrongs of water wastage.

Robocop: ‘Waste makes haste, for time is fleeting. A rolling stone is worth two in the bush.’

As a legitimate sequel Robocop 2 isn’t up to much, but as an exercise in inane silliness it packs a Nuke-style punch. The plot is basically a tepid retread of the original, with no real scope for our protagonist to develop, and though it may lack the refinement of Verhoeven’s violent, comic book masterpiece, some of the standalone ingredients are a pungent delight. 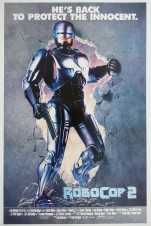