Tagline: Welcome to America in 2019, when the best men don’t run for president, they run for their lives.

By 1987, Arnold Schwarzenegger was well on his way to becoming the world’s most recognisable superstar. Following on from mainstream success as James Cameron’s cyborg assassin The Terminator, a pumped-up Arnie would land money-spinning leads in movies such as Commando and Predator, quickly becoming an icon in both the action and sci-fi genres. By the time Schwarzenegger played Ben Richards in The Running Man, a plethora of action-packed features were being put into production with the actor specifically in mind, while go-to writer Steven E. de Souza began churning out the kind of delicious puns that made his wooden performances not only passable, but iconic.

The problem with a winning formula is that studios can become a little too comfortable. Safe in the knowledge that their marquee star is a licence to print tickets, there is less of a need to impress in other areas. This is very much apparent in The Running Man, which conceptually has so much potential, but even with Arnie at the helm it fails to fully capitalise as a blockbuster action spectacle, and compared with the likes of The Terminator and Predator this one comes across as rather low-key — strange since the movie had a vastly superior budget. As a platform for serious speculative fiction The Running Man is something of a missed opportunity.

That’s not to say it is a bad movie. In fact, it’s really quite special thanks to an injection of kitsch charm and the kind of McBain-styled self-parody that would soon resonate throughout modern culture. While its vision of a futuristic 2019 remains very firmly in the mid-1980s, The Running Man is a wonderful time capsule into the cheapo charm of a period when bigger was better, and as a consequence more advanced. For my money, no other mainstream movie sums up the VHS era quite like The Running Man, and despite its idle gimmicks and hackneyed play on dystopia, there is much to appreciate here, particularly for action movie junkies with a penchant for the garishly absurd.

The movie is loosely based on Richard Bachman’s novel of the same name. Bachman was the one time pseudonym of prolific horror writer Stephen King, and for those who have read the book you will know that, though sharing the movie’s sense of irony as a satire on the modern media, it is a much grittier tale of poverty and desperation, where contestants are not only pursued by bounty hunters but by a starving public seeking rewards for locating the hit TV show’s targets. In the novel, Ben Richards is just another jobless sickie risking his life for the welfare of his family ― a rather astute commentary on Reaganite politics that taps into the perverse power of modern celebrity.

With no desire to ruffle any such feathers, director Paul Michael Glaser ― a last minute replacement for original director Andrew Davis ― takes a more tepid and politically friendly approach to the source material, one of absurd caricatures and faux technological advancement. Instead of taking place on the streets of the United States, The Running Man show is confined to the dungeons of a TV studio, and the stalkers are larger-than-life characters who are something akin to the good old days of American pro wrestling, which was at its mainstream peak in 1987. The show’s ‘runners’ are not starving people suffering under the boot of private power, but ex-cons looking for freedom and a handsome payday ― at least that is the claim of entertainment conglomerate ICS Studios and their nationwide propaganda model.

A former army general and scapegoat for the ‘Bakersfield massacre’ ― a government act in which thousands of starving civilians were cruelly gunned down ― Richards escapes a labour-intensive prison camp and seeks out The Resistance, a rebellious group living in the shantytowns on the outskirts of the city. Inevitably, it isn’t long before Richards and his buddies are picked up by ruthless television personality and The Running Man host Killian, a ratings-obsessed slimeball who feeds on the adulation of the masses while sending innocent men to their onscreen demise. He even finds a place on his show for sexy ICS employee Amber Mendez, whose time as a hostage of Richards is enough to convince her of the network’s manipulations. Killian is played by a wonderfully malevolent Richard Dawson, whose time as a real-life TV host proves the movie’s masterstroke. Dawson is a revelation who lends the film’s oppressive landscape the kind of sleazy panache that events often hinge on.

The Running Man works best as the kind of gaudy spectacle that leaves all plausibility gasping in its wake, but there are a few Vernhoeven-style quirks along the way, which along with a plethora of puns keeps the movie ticking along as it sprints through a mercifully succinct, by-the-numbers set-up. Highlights include former-pro- wrestler-turned-Governor Jesse ‘The Body’ Ventura as a retired stalker and host of Captain Freedom’s Workout, another popular ICS vehicle that plays on America’s newfound obsession with aerobics, while another ICS show Climbing for Dollars sees men scurrying in search of cold, hard cash as rabid dobermans bay viciously for their blood and gas-spraying booby traps threaten to turn them into dog meat.

The movie is lent further credence by Live and Let Die‘s Yaphet Koto and perennial ’80s firecracker Maria Conchita Alonso, the latter providing Arnie’s latest chemistry-free love interest after becoming yet another pawn in the totalitarian narrative of ICS’ hegemonic network. There is even a brief and welcome appearance from Fleetwood Mac’s Mick Fleetwork, almost unrecognisable as wizened Resistance leader Mic, a covert Brit who looks to guide Arnie along a path of cheap-looking sets to studio-friendly freedom.

The main event is reminiscent of a Nintendo video game as a gang of network stalkers are set loose on our fleeing protagonists. Characters such as Buzzsaw, Sub-Zero, and Fireball possess the kind of deadly gadgets that have transformed them into prime time superstars, while an opera singing stalker name Dynamo is surely just played for laughs. Of course, they didn’t bank on Arnie and his plethora of acerbic one-liners, and soon Killian is bargaining with their latest contestant after he acquires the uplink code that could potentially jam the network’s satellites and reveal ICS as the lying miscreants they are. But when your audience are a a gang of bloodthirsty sadists with a taste for TV-bound genocide, you kind of question the point of it all.

After tussling with ice-skating assassin Professor Sub Zero, Arnie leads the Asian mammoth and real-life pro wrestler Professor Toru Tanaka on an ice-bound goose chase, before wrapping a length of razor wire around his neck and turning his throat into duck liver pâté. Nice!

Okay, so Ben Richards was set up after the Bakersfield Massacre footage was doctored by the creative powers that be. But why would they film the massacre in the first place if their aim was to keep it a secret? And how were they able to shoot the scene from multiple angles from what appears to be several different cameras? There is even a Richards POV shot and shots from outside the helicopter.

Referred to as ‘light bulb’ by the impossibly witty Richards, Dynamo is a giant ham in a suit of armour made entirely of Christmas lights. Never convincing in his ability to move, let alone fight, Dynamo spends half of the movie in a giant pair of underpants, his stalking endeavours consisting of driving up a 90 degree hill in his electric kart and landing at the mercy of Richards. Later, after trying once again to have his wicked way with the delectable Amber Mendez, Dynamo is electrocuted when the sprinkler system rains on his brightly-coloured parade.

A dipshit of the highest order.

During a tussle with a steroid-pumped, chainsaw-wielding Buzzsaw, Richards gets into a test of strength, one which ends with the weapon being jammed into our antagonist’s nether regions. With Buzzsaw’s weightlifting belt now split down the middle, Amber enquires about the monster’s whereabouts:

Amber Mendez: What happened to Buzzsaw?

Ben Richards: He had to split.

After watching Richards marched through the ICS studios to his televised fate, a startled Amber is comforted by gossiping colleague Amy.

While clunky costumes and uninspired special effects create a 2019 that is very much grounded in the 1980s, The Running Man offers moments of razor-sharp satire, and its extreme vision of media-driven indoctrination is perhaps more relevant than ever. Also, pay close attention to Harold Faltermeyer’s original score, a seething rock-synth classic that grows richer with every listen. 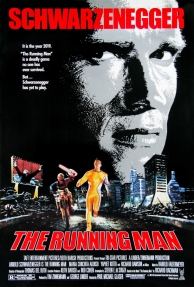 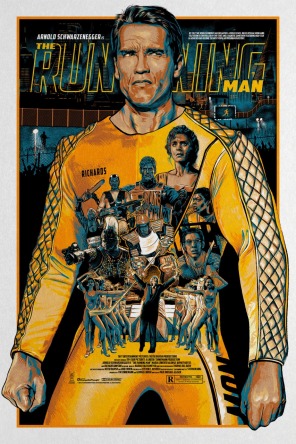