Tagline: The ultimate American fighting machine is back!

The American Ninja franchise is a true product of the VHS era. Much like the No Retreat No Surrender series, they are movies of low production value which only seem to decrease in quality, but there is something about them that keeps us coming back. Back in the 1980s Cannon Films would exploit America’s fascination with martial arts to devastating financial effect. This had very little to do with the quality of action on show, owing more to the lure of Cold War patriotism, as an inherently fascist cinema exploded in a barrage of invincible protagonists and playground high-kickery, a plethora of cardboard heroes fulfilling the base desires of a generation.

Characterisation, plot, general logicality – it all meant very little to Golan Globus and their fast food business model, one that took bottom rung scripts and churned out action fodder by the bucketload. Most of the time they would pitch a title and advertise for investors before a general premise had even been outlined, Menahem Golan often devising a movie’s plot and its characters on the fly in little more than a few minutes. It was a bizarre method that resulted in mountains of forgettable claptrap, but sometimes we connected with Cannon’s paper-thin characters on a level that was unexpected, and in the era of the numbered sequel and continued growth of the home video market, such low-ambition companies were able to turn a tidy profit.

1985 would mark the release of the first American Ninja movie, a typical Cannon hodgepodge that would gross more than three times its $1,000,000 budget. Two years later, the second instalment, made on a minuscule $350,000, would recoup more than ten times that amount, while subsequent VHS sales—tapes were then sold to rental stores for an astonishing $55 dollars per unit—would prove an intoxicating accompaniment for the money men at Golan-Globus, the kind that would one day see them tackle the mainstream with predictably dire consequences. Superman IV, anyone?

So what is it about the American Ninja franchise that is so appealing? The first movie was about as trite and predictable as the title suggests. Xenophobic and chocked full of absurd stereotypes, it was a lazy yet appealing formula with a steely-eyed protagonist and token black sidekick bumbling their way to freedom. Steve James, who plays that sidekick, was a physical specimen who could likely kick his fair share of ass, and while Sgt. Joe Armstrong (Dudikoff) looked more like a cherub-faced boy band member than an indestructible stealth assassin, his lack of dialogue would lend him a mystical air that you could really get behind, especially as a child.

In hindsight, I think part of the reason I cherished the series is because its fight sequences were not too dissimilar to those I would perform with my friends at playtime. Due to increasingly humble budgets, there is little blood on offer in the American Ninja series, and sword attacks are either two inches shy of actual contact or consist of a plastic weapon gripped under the armpit. Our so-called stealth assassins do very little to conceal themselves, attacking in clumsy, unskilled rabbles and falling about the place like idiots. Watching the movie, I actually believed that I could be a ninja. At five years old, I was almost as skilled as the movie’s extras.

American Ninja 2: The Confrontation is even more ludicrous than its predecessor, and as a result perhaps more enjoyable. James is the sequel’s centrepiece, displaying the kind of infectious charisma that keeps the movie alive through long stretches of laughably mundane dialogue. Here, the two have evolved to have more of a buddy cop relationship, a fact that James seems to thrive on. Dudikoff, on the other hand, is more befitting of the lone soldier persona, a warrior whose strength lies in the mystery he exudes. But at the end of the day, who cares? If you’re watching this movie with a critical eye, shame on you! Just be happy to ride the wave of spuriously staged ineptitude.

The plot is almost a carbon copy of the original, but one which possesses the kind of sci-fi twist that will leave you choking on incredulity. After a host of marines begin mysteriously disappearing from an army station on a remote Caribbean island, cipher clerks Armstrong and Jackson are sent to investigate, a rather fortunate coincidence since ninjas are once again at the centre of an improbable operation, and are clearly rather fond of the kind of bright locations that only serve to render their stealth attire useless.

Everywhere our two heroes go they seem to find themselves in trouble. Even the base’s captain—decked out in a Hawaiian shirt and beach bum shorts—doesn’t care for our two outsiders, reluctantly explaining that a kid who hangs around the barracks “saw two giants dressed head-to-toe in some kind of strange black suits”. Of course, this leaves our two heroes with a very familiar glint in their eyes, although the captain is baffled to hear the word ninja, which may as well be an alien language to a man who is supposed to be trained in the art of deadly combat but who instead sits around scratching his nuts while his entire division succumbs to kidnapping.

It is also worth noting that Dudikoff is often replaced by a stuntman throughout the movie. This would be nothing out of the ordinary if that stuntman appeared only during dangerous feats of acrobatics, but sometimes they seem to replace him just for the hell of it, and in one scene early in the movie Joe and Jackson are dismissed from the captain’s office only for that stunt double to take Dudikoff’s place, blatantly strolling out in plain view of the camera. Incredible!

Another thing that struck me about American Ninja 2 was the sheer quantity of ninjas living within such a small locality. All day they seem to waltz around in full combat regalia, standing on the highest rocks they can find or simply hanging around in local bars without ever going detected by a giant military presence intent on colonising the world. This is supposed to be the United States Marine Core, for Christ’s sake! The sheer wealth of research that went into making this movie is just astounding.

After tepidly making their way through a series of Nintendo style fight scenes, Joe and Jackson finally stumble upon Leo ‘The Lion’ Burke (Conway), a sleazeball super-criminal who has kidnapped a local scientist in order to transform the abducted marines into an army of genetically enhanced super ninjas. It is here that the movie becomes truly mesmerising in its ability to make one chuckle, particularly when analysing ‘The Lion’s’ delusional master plan, one which includes ostentatious karate displays in which members of his ninja army senselessly slay each other, presumably costing him and his watching investors millions.

Our heroes do get a little help along the way, mostly from the professor’s tenacious daughter, while a young boy serves his purpose of making Joe look like a sagacious father figure. Our totally radical captain also sees the light, inevitably bowing to the wisdom of his subordinates and ditching the beach bum lifestyle for a rocket launcher, but with his skills proving ordinary at best, the question still remains: can our two mortal heroes take on an entire army of indestructible supermen single-handed?

Well, that would just be spoiling things, wouldn’t it?

Setting Joe up in a local bar, traitor Tommy attempts to come clean about his part in the disappearance of his fellow marines but is distracted by a strange noise coming from behind the curtains of a cheap, windowless set. He is then impaled with what can best be described as an elongated toilet plunger.

Falling asleep moments into a boat ride, Joe and Jackson are led to a tiny, uninhabited island and ambushed by so many ninjas they would need a cruise ship to get there. Escaping their pursuers, our two heroes then leap a hundred feet from a giant rock, only to step comfortably into a small boat in the next frame when in reality they would have crashed through the bottom and sunk everyone.

Moments after making it clear that our heroes are not welcome at his barracks, Capt. ‘Wild Bill’ Woodward soon cosies up to them by insulting foreign host Inspector Singh, proving that prejudice stops at the red, white and blue.

Capt. ‘Wild Bill’ Woodward: ‘I don’t like that tiny maggot. I don’t like him at all. I mean, what is this? Ninjas, drug pushers, my men being kidnapped and murdered. This is really beginning to get on my tits!

A low-budget cash cow with an intangible mainstream appeal, American Ninja 2 turns to the buddy genre for inspiration, and while it inevitably falls short in its attempts, where it does excel is in its supreme capacity for accidental hilarity. Just one question: if Joe blossomed under the tutelage of a Japanese master before succumbing to total amnesia, how did he grow to become so patriotic? As long as enough people die in the name of democracy, I suppose it doesn’t really matter. 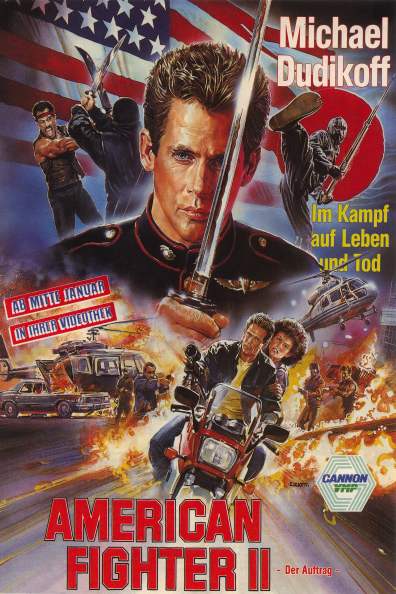