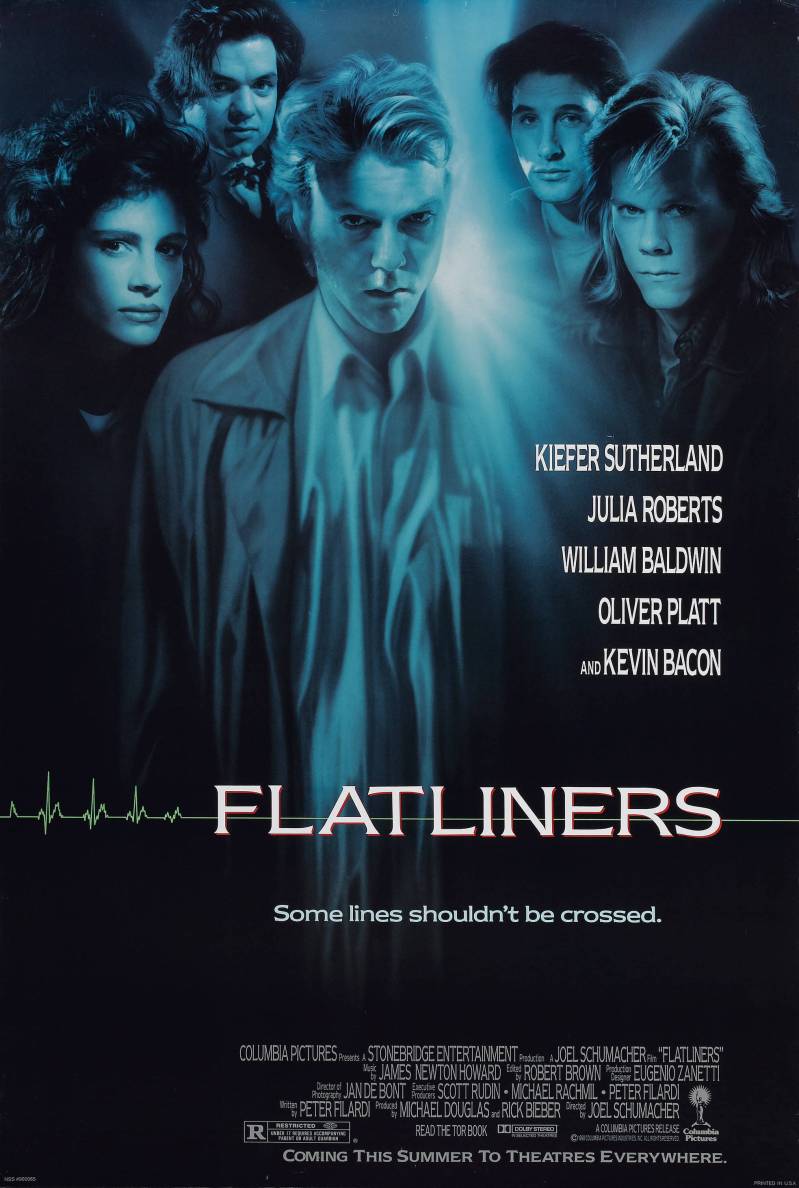 Tagline: Some lines shouldn’t be crossed.

Flatliners could have been so much more. In fact, in the hands of someone like an early David Cronenberg, it may have been something rather special. The movie’s concept is quite brilliant: four medical students set up an experimentation lab and induce death with the aim of gaining some kind of grasp on the nature of the afterlife. Led by the irrationally ambitious and wholly self-serving Nelson (Kiefer Sutherland), they each take turns to venture into the purgatorial recesses, their curiosity outweighing their fears as they descend into a battle of one-upmanship to see who can hold out the longest.

Joining Sutherland are Julia Roberts, Kevin Bacon and William Baldwin, the kind of Brat Pack casting that immediately limits the movie’s macabre potential, and though the cast are undeniably talented the scenarios are little more than trite morality plays with saccharine resolutions. The result is a tepid quasi-horror and one of the biggest blown opportunities of the decade.

The film was directed by a pre-Batman Joel Schumacher, and he displays considerable skill and ingenuity, particularly when capturing the surreal uncertainty of the afterlife. Each character is haunted by a past discrepancy which threatens to bleed into reality—this in spite of the fact that most of the people they have wronged are still very much alive and well. From there the movie consists of ever-expanding journeys into the somewhat familiar realms of the unknown, our gang sweating over the possibility of their friends staying dead in a series of superbly orchestrated scenes.

Nelson and David (Bacon) are each tormented by the children they once bullied—yes, two of the four dilemmas are identical to one another—while slick Lothario Joe (Baldwin) is confronted by visions of the many women he has blagged into bed and secretly filmed as additions to the ‘Joe Hurley Video Library’. Rachel (Roberts) is plagued by memories of her dead father, and all of this is presided over by a thespian-tongued neurotic named Randy (Platt), his mood-establishing dialogue closer to Edgar Alan Poe than anything resembling reality.

In the end, it is a lack of authenticity which sees the movie suffer. Yes, the plot is too preposterous to hold up under any serious dissection (how many people have been clinically dead for 13 minutes only to return fresh as a daisy without even a hint of brain damage?) but with a little more imagination we could have had something genuinely creepy and uniquely disturbing.

Unfortunately, this is nothing more than textbook Hollywood, a chance for atheists to find redemption and embrace religious absolutism, a chance for a philanderer to realise the value of true love, for a spoiled brat to make peace with her dead relative and a whole bunch of other perfunctory resolutions which are borderline melodrama.

Questions of life and death and the mistakes people make are much richer than what Schumacher’s technical masterclass presents us with. Okay, so this is entertainment, but the concept far outweighs the presentation. If this was a mainstream drama or straight-up thriller there would be no complaints, but there would probably be much less fanfare. This is a good movie, sometimes very good, but something doesn’t quite fit the bill.

2017 will see the release of a Flatliners remake almost thirty years in the making. The movie holds a special place for many, and it’s easy to see why. It is slick and expertly made and speaks to our sense of idealism. Those people are probably horrified by the prospect of a money-spinning production that will surely save on millions in advertising—which is precisely the point. As for those who saw the original and feel the way I do, you may see mark II as a chance for some kind of tonal redemption, a chance to take a concept with endless potential and transform it into the existential wonder it could have been.

In reality, Flatliners threatens to be yet another in a long line of reboots cashing in on 80s nostalgia. Maybe the original wasn’t so bad after all.

Sitting in the back of a van following his first foray into the afterlife, a disbelieving Nelson stares into the bowels of a dark, smoke-strewn alley as something vaguely familiar crawls out of the blackness. That something is a whining dog with crippled back legs, the very same that greeted him on the other side. Yes, this is as scary as the movie gets. Shame on you, Hollywood!

Scarred and wracked with nerves following a series of real-life beatings, Nelson is once again confronted by the hockey stick-wielding kid who has somehow made the leap from fantasy to reality. Luckily for him, he is then awoken by love rival and all round nice guy David, who quickly solves the mystery by pointing out that Nelson has actually been attacking himself with a hockey stick all along.

Fed up with his whining colleagues and their endless moral objections, Nelson has some choice words for the pussies riding his coattails.

Nelson Wright: You bring the equipment, I’ll bring my balls.

And they’ll bring their blindfolds.

A movie with infinite potential that is never allowed to rise above the realms of mediocrity, Flatliners suffers from a rigid adherence to the Hollywood formula. Well made if that’s what you’re looking for, but a case of the right concept in the wrong hands. 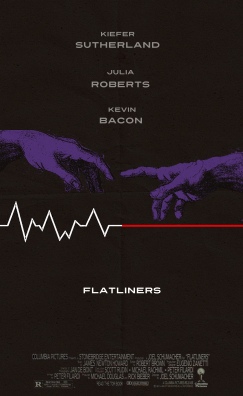