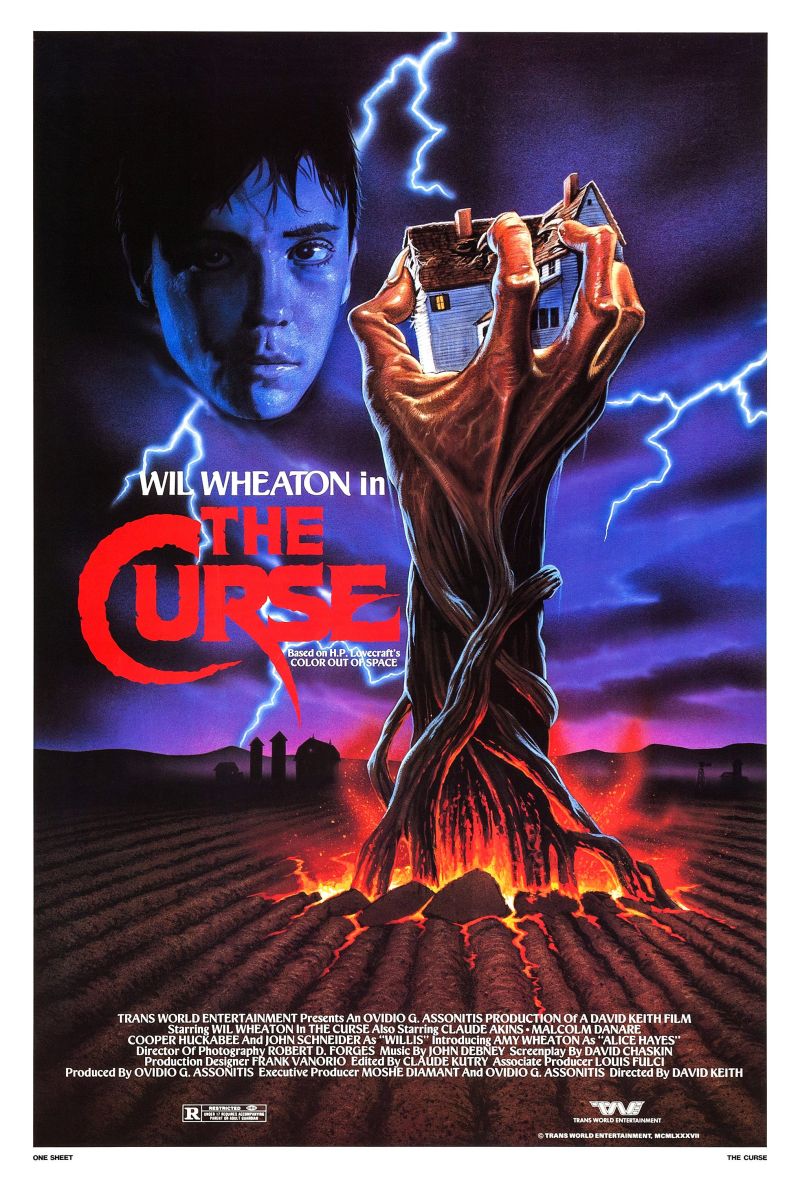 Tagline: No one believed him. Now, no one’s left to save him.

It never quite happened for Will Wheaton, did it? After shooting to fame in the early 80s with cult movies The Last Starfighter (1984) and Stand by Me (1985), the sky certainly seemed to be the limit for the gangly little cherub who will forever be known as Gordy Lachance, but in spite of a decent run as Wesley Crusher in cult series Star Trek: The Next Generation, his career would prove spotty at best.

What were the reasons for his downfall? One theory is that Wheaton suffered from ‘Daniel Larusso Syndrome’. Ralph Macchio was a bona fide heartbreaker as the doe-eyed wimp with a pugnacious will to overcome the odds, but once that gangling frame reached manhood—at about thirty by my estimation—he went from heartthrob to commercial oddity almost overnight, and as far as I can tell Wheaton suffered from that very same curse.

That being said, his mainstream career hit the skids long before puberty set in. Was it simply due to the fact that he wasn’t much of an actor? After his performance in Stand by Me that would be something of a harsh conclusion. Maybe there were complications behind the scenes: a string of misfortunes or some bad decisions on behalf of his casting agent. The truth is, we will probably never know what went wrong.

What I can tell you is that, according to the youngster’s filmography, the rot seemed to set in around 1987, a time which saw him relegated to the realms of television movies when he should have been riding the crest of a successful wave. It is perhaps no coincidence that 1987 was the year he starred in David Keith’s The Curse, an adaptation of H.P. Lovecraft’s short The Colour Out of Space. Lovecraft is a writer of considerable talent, and one who has influenced much of modern horror cinema, while this Italian-American sci-fi/horror picture was co-produced by none other than giallo maestro Lucio Fulci, but Wheaton had his work cut out if he was to ever make a mark with this effort.

It’s not that the movie is terrible. It’s hokey and often laughable, but that is only to be expected from an era chocked full of charmingly inept productions, and charmingly inept this is. Add to this some wonderfully gory special effects and a couple of bright over-the-top performances and you’re halfway to a genre triumph. The problem is, it’s just not scary. For anyone over the age of ten it’s pretty damn hard to be truly scared by anything, but when horror is done correctly there is at least a jump scare to catch you off-guard or even a moment of knife-edge tension or ominous foreboding, but there is none of that here. As a horror movie, it is something of a failure, despite a genuinely interesting premise.

Part of this can be attested to the soundtrack, which borrows quite blatantly from John Carpenter’s terrifying Halloween score, only to blend it with some laidback hillbilly music. Okay, so the movie is set on a farm somewhere out in the sticks, but that kind of mellow southern twang just kills the tension dead unless we’re dealing with a creepy backwoods horror such as Deliverance. It also suffers from the absence of a clearly delineated villain, while one performance sticks out like a sore thumb that desperately needs chopping off, but more on that later.

The Curse is the story of Nathan Crane (Akins) a semi-religious nut who is determined to hold onto his farm as a sleazy realtor attempts to buy out his and much of the surrounding land in the hope that the Tennessee Valley will choose the town as the site of a new dam and recreational centre. Crane has a sex-starved wife who ends up in the arms of a hairy farmhand, while stepson Will Wheaton’s Zack takes the vicious brunt of his pious self-loathing.

One night, what appears to be a meteorite crashes on the crane residence, but the local doctor is persuaded to cover it up by a seductive wife who feels the development of the area is in their best interests. Of course, in typical horror fashion the selfishness of their decision has dire consequences for everyone involved. After the unidentified object melts and seeps into the soil, plants and livestock become infected, and while horses bubble and mutate, humans exposed to the substance develop legions and transform into murderous zombies.

Kathleen Jordon Gregory is wonderfully psychotic as Crane matriarch Frances, a scene in which she is tied to her bed while her zealot husband recites bible passages in the dark proving particularly memorable. But for every interesting character there is an insufferable cretin weighing down proceedings, and none are more detestable than Zack’s stepbrother Cyrus, a puerile malcontent whose death can not come quick enough. Everything about this insufferable douchebag strips away at your nervous system, and you find yourself infuriated beyond any semblance of concentration. From the two-bit acting to the blubbering, overgrown petulance, never in my life have I longed to see a machete-wielding Jason Voorhees arrive to dish out a little teenage justice.

As for the curious case of Will Wheaton, his performance is somewhere in the middle, not bad but lacking any kind of distinction, much like his subsequent onscreen career.

Leaving the local doctor’s sultry wife at the mercy of a pack of rabid dogs, sleazy realtor Charlie Davidson takes refuge in the family’s cellar, only to have his throat ripped out by a crazed and mutated Frances.

In a cute and commendable nod to Alfred Hitchcock’s The Birds, the Cranes’ youngest daughter is savagely bloodied in a frantic bout of pecking as the farm’s chickens succumb to the contaminant’s rabid properties.

When something resembling a meteorite crash lands on the Crane farm, local intellectual Dr Alan Forbes climbs into a giant smouldering crater and approaches the still glowing ball of fire. He even leans in for a closer inspection and taps it with his pen, claiming to possess a certain degree of knowledge in regards to giant molten boulders.

And he didn’t even fetch his goggles!

After discovering that the meteorite is something else entirely, local physician Alan Forbes decides to contact the authorities but is swiftly convinced otherwise. The next very next day he provides a pathetic explanation for his increasingly concerned neighbours.

Dr Alan Forbes: Looks like we’ve put a finger on your meteorite. It seems it isn’t a meteorite at all. As it turns out…(laughs) I don’t know how to say this delicately. I think what we have here is some…jet airliner let loose its holding tanks right overhead (looks around unconvincingly) and…it froze…on its way down…like a big hailstone.

The Curse is not all bad, with an intriguing set-up that gets the horror juices flowing, but the movie seems to fizzle out prematurely, while a curious haunted house ending seems inappropriate and tacked-on. Even so, the movie could have been so much more had it only offered a few genuine scares (this is a horror movie after all) and Cyrus’ infuriating face gives them every reason to break out the chainsaws.