It’s impossible to hurl too many superlatives at Castlevania: Symphony of the Night because it deserves each and every one of them. Is it the best PlayStation game ever made? Is it the best game of the 1990’s? Is it the best game ever? These are legitimate questions that gamers and fans of the title have been asking themselves and others since its release in 1997.

I’ve been a huge fan of the Castlevania series since the original on the NES and have been playing any version I can get my hands on ever since. It didn’t matter if it was on the NES, SNES, N64, Gameboy, Gameboy Advance, DS, Genesis, Xbox or PlayStation. If the word “Castlevania” was included anywhere in the title, I wanted to play it. This was one of the games I bought used, shortly after purchasing my PlayStation as a nice action-adventure alternative to the sports titles I was primarily into at the time. I just assumed that a 2D Castlevania game on a 32-bit system would be an amazing gaming experience and I wasn’t wrong.

Symphony of the Night excels in just about everything it tries to do, which is a lot! Dracula’s castle, where the game takes place, is beautifully rendered, with so many details I find myself staying in rooms longer than required in order to enjoy the view. The music and sound effects are equally impressive and really take advantage of the CD quality available on the PlayStation. The game’s music is so well regarded that there are music CDs available for fans of the compositions. The voice acting can at times be a bit over the top and there are occasional localization gaffes, but it’s easy to overlook those minor grievances when everything else about the game screams excellence.

As for the gameplay, you play as Dracula’s son, Alucard, who has returned to his father’s castle to defeat Richter Belmont (of Rondo of Blood fame), who now appears to be possessed by evil after being lost in Dracula’s castle. Throughout your mission, you’ll also meet additional characters within the castle who help advance the plot. Most of them don’t have much to do or say with the exception of vampire huntress Maria Renard, Dracula’s servant Shaft, and Dracula himself, of course. But that’s ok, this game is about Alucard and his attempt at thwarting his father’s resurrection from the dead. 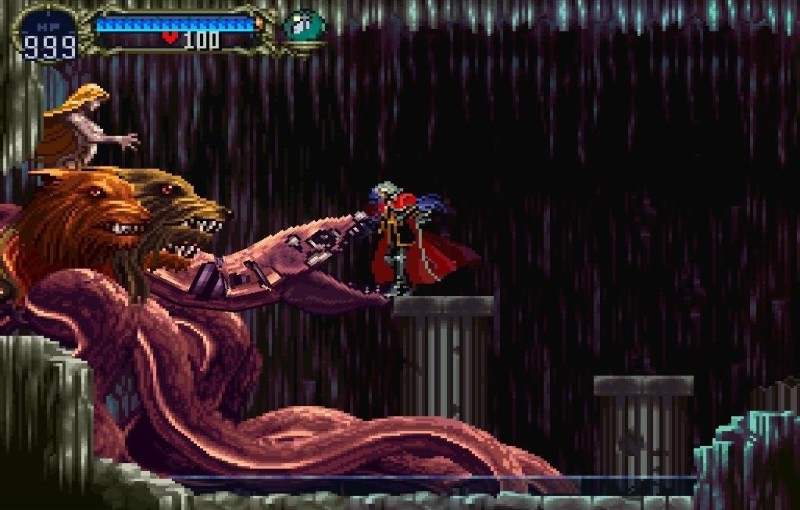 There is a very interesting and clever plot twist in the middle of the game (or at the end of the game depending on if you truly complete it or not) that caught many gamers completely by surprise if they discovered it. By now, it is likely common knowledge that the game isn’t truly finished when you fight Richter and the true goal of the game is to prevent Dracula from being resurrected by his faithful servant, Shaft (you damn right!). Shaft inverts the castle if you do not kill Richter and the entire second half of the game is played in this inverted version of the castle. This makes everything that was once familiar, unfamiliar again. This is also where the game gets truly difficult, so anyone who thinks the game is a breeze probably didn’t actually play through the “hidden” second half of the game.

Castlevania: Symphony of the Night is also known as the originator of the “MetroidVania” sub-genre of video games. What this means is that aspects of the Metroid/Super Metroid games (non-linear, access to areas that are closed until certain items or skills are earned/found) are melded together with Castlevania elements (gothic horror, hack and slash). This game also provides elements of RPGs with the level-up system & magic spells, strengthening Alucard’s attack as the game progresses.

For the Castlevania purists, there are still pieces of the castle to break that reveal special weapons, hearts (for use of your special weapons), money (which you can use in the shops to buy items) as well as potions and other items to help protect and strengthen Alucard. It wouldn’t be Castlevania if you weren’t able to also find food items hidden on your journey, except Castlevania: Symphony of the Night‘s menu is more buffet style. You can find a variety of fruits, desserts, breakfast items, drinks, protein in the forms of meats and cheeses and even sushi. I sure hope they keep the castle at a nice refrigerated temperature.

Thankfully, you have an easy to access inventory screen to keep track of everything you have earned, bought and found and can equip and use items as necessary. There is also a map of the castle that you can use to see which parts you’ve been to and which parts you’ll have to back-track to once you’ve gained whatever magic or skill necessary to advance. While this might all seem like a lot to manage, the game and it’s secondary screens are intuitive enough that it takes very little time to learn. Also, it is not necessary to constantly go back and forth from weapon/item screen to game screen, so you don’t have to worry about interrupting the flow of the game too often.

Alucard is the man, even though he may be mistaken as a woman at first glance with his long, flowing locks and feminine facial features. Don’t be confused though, this androgynous man-beast is a bad-ass. It helps tremendously that the programmers made his movements some of the most fluid jumping, striking, and dodging for any character in any video game, ever.

All of Dracula’s castle is a work of pixelated art, but my personal favorite is the underground caverns. The layout of the caverns force you to revisit them multiple times throughout the game as your experience and abilities change/increase. I like the grotesque water creatures that exist in the caverns. I like the mid-tempo electronic music that plays. I like the waterfalls that cascade down and all the secrets the caverns hide from you. Even the creepy Ferryman with his Crypt Keeper speaking voice is endearing. The only thing I don’t like about the caverns….those darn toads.

There are a lot, and I mean a lot, of weapons and items for Alucard to obtain in Symphony of the Night, but many of them are indiscriminate from each other. What really matters in this game are the relics. You gain relics typically after completing a section of the castle or defeating a particular enemy. Some can be found through trial and error and *cough, cough* walkthroughs posted online. Most of the relics must be found in order to progress through the game, however. One relic in particular, the Soul of Bat, allows Alucard to turn into a bat, which in turn allows him to access areas of the castle that he’s never been able to access before. Castlevania: Symphony of the Night does a great job of showing you early on what you can’t access, so it’s up to you to remember where you now have access to once the Soul of Bat is found. It’s one of the most satisfying acquisitions in a game filled to the brim with them.

It doesn’t matter how long it’s been since I last played this game, I am perpetually in awe of how perfect it is. Castlevania: Symphony of the Night is simply a must own for any fan of the series, of action platformers or adventure games as a whole.