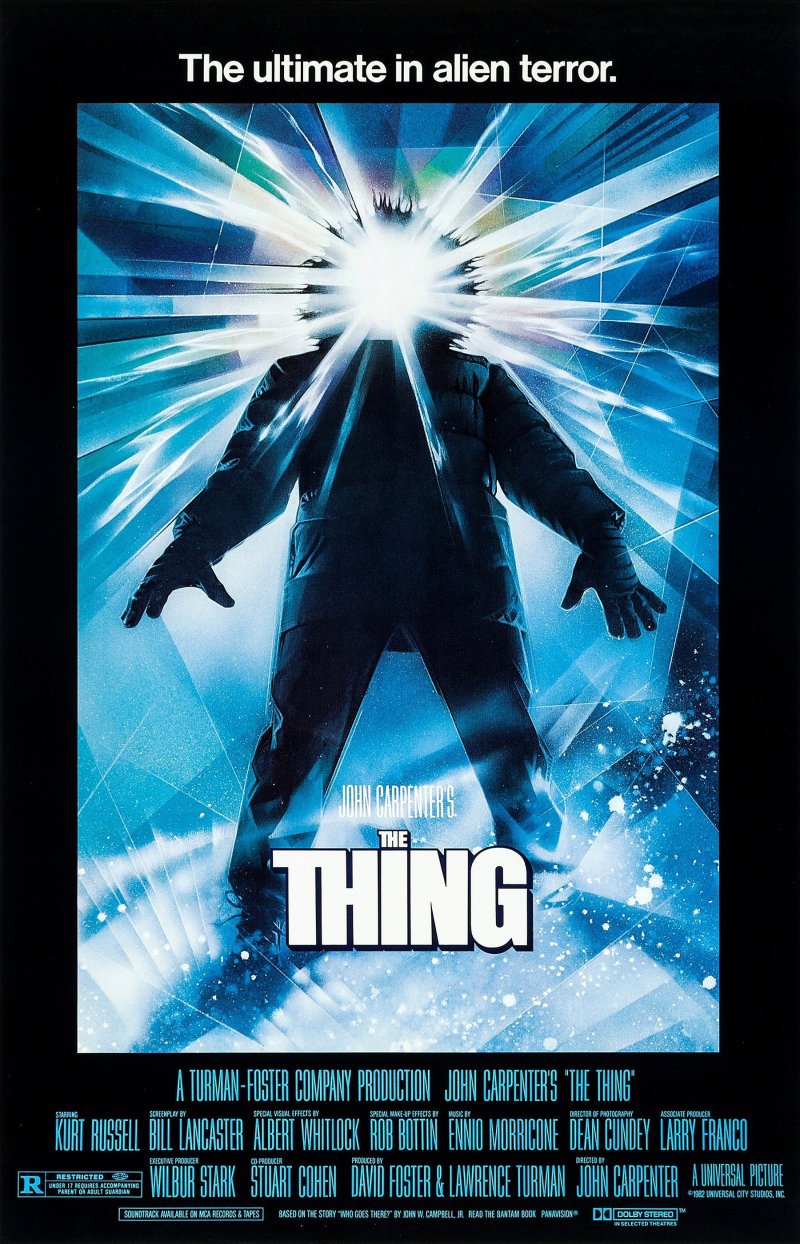 In an era of countless reboots, we have come to regard the whole process as a cynical exercise whose primary goal is to slash expenditure, but that was not always the case. There was a time when remaking movies was about taking a classic conception and upgrading it to meet modern standards. Those operating the Hollywood cookie cutter will have you believe that this is still the case, and while the rise of CGI can back that up to a certain extent, movies such as John Carpenter‘s The Thing not only improved the appearance of their predecessors, they found other ways to make their product better, employing elements which set them apart from their source material.

At the time of its release, The Thing‘s main drawing point was its practical effects, which would have been just as astonishing to moviegoers in the early 1980s as CGI is today. Unlike the majority of today’s productions, that wasn’t the only valuable difference on show. The effects that Carpenter collaborator Rob Bottin brought to the big screen were breathtakingly audacious, but the movie is driven just as much by the subtleties and slow-burning tension of those early scenes: the invading husky which quietly stalks the outpost, the two-faced corpse dripping off the examination table in search of its next victim. This is a venture approached with the utmost care and respect.

The Thing‘s visual set-pieces may seem dated to a modern audience, but while CGI can be regarded as looking more realistic, today’s movies tend to have a shorter shelf life in terms of their ‘wow factor’. Each movie is infinitely more breathtaking than the last, but those improvements are a result of ever-advancing technology, each spectacle becoming quickly outmoded. Practical effects, when achieving this kind of magic, are a testament to human resourcefulness and ingenuity. Almost forty years after The Thing‘s initial release, there are still moments when you stop and think to yourself, ‘How in the hell did they do that?’

Dr. Blair – You see, what we’re talkin’ about here is an organism that imitates other life-forms, and it imitates ’em perfectly. When this thing attacked our dogs it tried to digest them… absorb them, and in the process shape its own cells to imitate them.

When Bottin joined up with Carpenter and Co., pre-production was already underway. Still, a design for the eponymous creature was yet to be thought-up, and Carpenter wasn’t too pleased with Bottin’s initial ideas, finding them a little on the peculiar side, but when collaborator Dale Kuipers was forced to leave production for personal reasons, the task was dumped firmly in his lap. Bottin had just finished work on metamorphic werewolf flick The Howling and since The Thing had presumably travelled the universe to wind up near the cast’s doomed outpost, the creature would no doubt retain some of the physical attributes of other alien hosts. It was suggested that Bottin work with comic book artist Mike Ploog, who the practical effects maestro was already a big fan of, and almost immediately things began to take shape. As Bottin explained during an interview with Fangoria, “When I described my ideas to [Ploog] he dropped his coffee cup. But what he came up with was great. We must have gone through a thousand drawings — all good stuff. There was enough for six more movies.”

Carpenter had been reluctant to make the picture since he feared he wouldn’t be able to top the original, and so a lot of importance was put on what the director considered their best channel for improvement: the practical effects, and they wouldn’t disappoint. Owing to its transformative nature, the monster’s design was actually several, with a mish-mash of assimilated subjects melding into a shape-shifting grotesquery. “I didn’t want it to remind anyone of any monster they had ever seen,” Bottin continued. “I wanted to avoid, if possible, all the clichés. It was a dream come true. We could do anything; just think things up and make them.”

It was also excruciatingly hard work, and Bottin, who has become something of a recluse in recent years, struggled under the pressure of The Thing‘s large-scale production, even bringing in fellow special effects legend Stan Winston to lighten the crew’s burden. He would be responsible for the infamous scene with the shape-shifting dog, which was near the beginning of the movie and helped to influence the tone of what would follow. “I found it difficult to work with so many people,” Bottin would lament, “all with different needs and wants…It got to the point where I was thinking ‘If I have to do another stinking mechanical dog, I’ll go nuts. So, I asked John if we could use Stan. He said ‘yes’. What was interesting was that it was kind of like being a director and hiring an effects guy for my own movie. I told Stan what I had in mind, and just let him go. I didn’t even go over to his shop. I’d told him to call me when he was done; and when I saw it, I was blown away! I mean, he walks in with this outrageous dog-monster on his arm, and I just loved it!”

The Thing would revolutionise the field of practical effects, but there was much more to the movie than its visual embellishments. Like many of the greatest horror movies, The Thing plunges its characters into a hopeless environment of almost total isolation. Its remote location in the Antarctica makes them vulnerable to even the smallest hiccup, adding extreme weather conditions and limited supplies to their paranoia-induced battle with an unknown quantity. MacReady and his snow-bitten comrades have nowhere to turn and nobody to turn to, facing an alien entity in an alien land. Revisiting The Thing, I struggled to think of another movie with such relentless and sublimely paced tension. In this regard, it was, and perhaps still is, unsurpassed in the Carpenter canon.

Although Carpenter was no doubt influenced by Christian Nyby’s 50s alien invasion vehicle The Thing From Another World (the movie is referenced in the director’s low-budget horror, Halloween), The Thing is actually more loyal to John W. Campbell’s novella Who Goes There?, the literary source material for both productions. While the 1951 film ditches the story’s xenomorphic alien for a parasite of the standard bloodsucking variety, Carpenter concentrates on a creature that is able to assimilate other organisms on a cellular level, ditching the Cold War paranoia and Roswell references prevalent in its kitschy predecessor.

Carpenter’s titular monster is an entity of almost invincible proportions, a creature with the ability to divide and conquer with its miraculous abilities and surreptitious nature, proving itself an organism of raw intellect with an uncanny knack for self-preservation. Not only can it imitate the appearance of any other living being, it can adopt their personality and mannerisms, making it almost undetectable. Once the outpost’s specialist, Dr. Blair (Wilford Brimley) becomes aware of its unique abilities, he immediately reaches for his pistol. He may suspect that his colleagues are infected, but he can’t prove it, and every little action becomes a reason for scepticism and distrust. 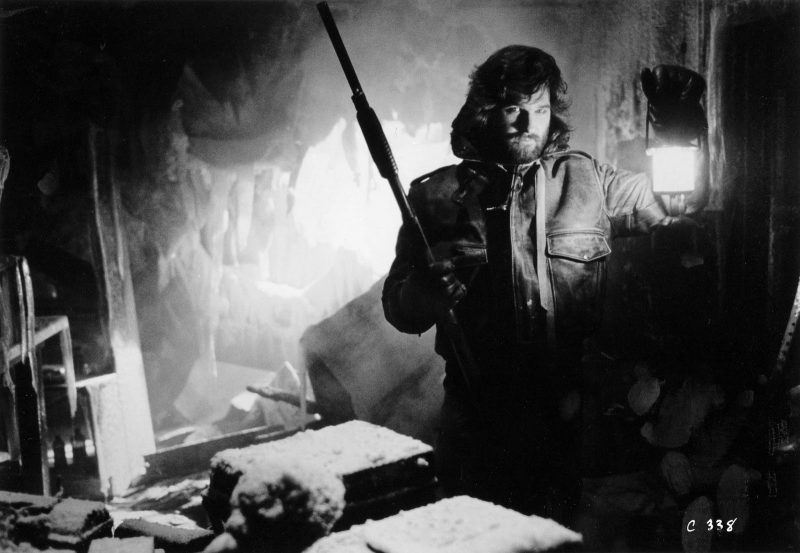 With this kind of set-up, the movie grabs you by the throat and never lets go, and there are so many classic scenes to cherish, each one more suspenseful than the last as the community continues to fall apart and infected crew members are picked off with an almost inevitable ease. Scenes such as MacReady’s one-man stand-off with a flamethrower and a handful of dynamite leave you breathless, while the legendary serum test is perhaps the director’s greatest ever set-piece achievement. There is even a scene to rival Ridley Scott’s Alien chest-burster, as Dr. Copper’s arms plunge into Norris’s opening torso, the creature’s modified form tearing off his limbs with its enormous, abstract teeth.

MacReady – Watchin’ Norris in there gave me the idea that… maybe every part of him was a whole, every little piece was an individual animal with a built-in desire to protect its own life. Ya see, when a man bleeds, it’s just tissue, but blood from one of you Things won’t obey when it’s attacked. It’ll try and survive…

One of the elements that helps set The Thing apart from Carpenter’s other movies is its cinematic scope and pedigree. The movie is classic Carpenter, but it benefits from a larger budget and all that it entails. Of course, it’s not as simple as that. Many a budget has been squandered by directors lost in the cyclone of financial potential, sometimes to their long-term detriment, but Carpenter uses his bounty wisely, retaining the ingredients which made his previous low-budget forays such unbridled successes, while embellishing only those elements that can improve his own inimitable formula. The Thing also benefits from a superior cast and screenplay, Carpenter’s future go-to star Kurt Russell effortlessly iconic in the role of MacReady, a supporting cast of considerable talent elevating the overall production. Crucially, the director also brings in legendary composer Ennio Morricone, who produces a minimalist score of brooding isolation, one strangely reminiscent of the tumbleweed-strewn Spaghetti Westerns to which he was also key. His inclusion, along with the location and vast, open landscapes, contribute to create the kind of cinematic experience his previous movies were lacking.

So determined was Carpenter to bring Morricone into the fold that he went out of his way to convince him to become involved, even though Morricone would later admit that he was far from an expert in the field. During another interview with Fangoria to promote quirky Jack Nicholson horror Wolf, Morricone would explain, “Maybe some people believe that when you score a horror film, your attitude and musical approach change. I my case, I confront all of my assignments in the same way…Carpenter flew to Rome and showed me his film. He was very insistent, and I liked his movie, so I decided to do it…when I went to Los Angeles to record the score, I brought a tape along that contained some synthesizer music I had recorded here in Italy. It was really difficult for me to understand what kind of score he wanted, so I composed an array of totally different things, hoping he’d find something of particular interest to him…And guess what? He picked the piece that mostly resembled his own personal compositions. That is of course the main theme, which can be heard throughout the movie.”

Is The Thing Carpenter’s greatest ever achievement? That seems to be the consensus amongst fans, and it is certainly the greatest platform for his particular set of skills. Carpenter retains the slow-building tension that was key to his other, low-budget masterpiece, Halloween, those heart-stopping subtleties preserved, his musical prowess lent further credence by a world-renown master of the art form. The Thing is classic Carpenter with a cinematic upgrade, a larger budget allowing him to loosen the leash on the visual limitations that once helped forge the director’s legendary resourcefulness, the kind that is still on display here. CGI would one day overshadow that resourcefulness, but here he gets the balance just right, staying loyal to those successful, once necessary subtleties of old, while bringing his latest monster out of the shadows and into the spotlight. 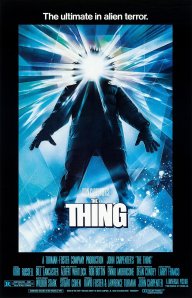 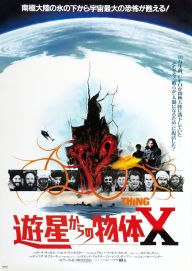 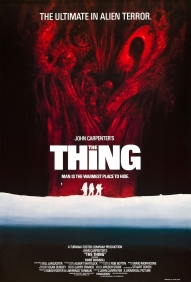