Tagline: A New Dimension In Terror…

Friday the 13th Part 3 feels about 10 minutes too long, and there is a very specific reason for this. Hoping to expand the series beyond two instalments after introducing a supposedly long-dead Jason as their marquee killer, Paramount decided to cash-in on the Reagan-era 3-D fad, a dismal period which included the likes of Charles Band’s Parasite, Jaws 3-D and the woefully absurd Amityville 3-D, an atrocity which featured some of the shoddiest practical effects ever conceived. 3-D sequels are a sign of desperation for any stale franchise (think Freddy’s Dead: The Final Nightmare), and both Jaws and Amityville died a slow death during their inevitable fourth instalments, movies which gave us a vengeful shark and a possessed lamp respectively.

The third ‘Friday’ instalment was perhaps the anomaly in that respect. Not only did the original franchise continue on for more than a decade after its 3-D foray, it successfully went from quirk to quirk in the years following its gimmick-laden third effort, giving us a ‘Final Chapter‘, a ‘New Beginning‘, and meta-infused sixth instalment Jason Lives!, a movie which deftly side-stepped the MPAA’s slasher censorship crusade by introducing the infamous ‘Zombie Jason’ and taking the series meta. But the main reason that kept Jason alive and killing came in the form of the soon-to-be iconic mask that he acquired from insecure prankster Shelley (Larry Zerner), a horror artefact that has become universally recognisable.

The 20 minutes of superfluous material comes in the form of several laughably inane, 3-D-inspired sequences, which not only kill the horror dead. Swinging bales of hay and 3-D yoyos may have proved a novelty at the time, but such ludicrous superficialities only serve to halt the action more than thirty years later, and the majority of those moments leave you stroking your chin with incredulity. Sometimes the cast resemble a chirpy gang of kids’ TV hosts teaching us neat tricks, like how to juggle three apples at once. I mean, this was a bare bones slasher franchise, what on Earth were they thinking? Still, any ‘Friday’ fan worth their salt knows that laughable comes with the territory. For many of us, it’s all a part of Jason’s inimitable charm, and the seeds were sown in Part 3.

Part 3 would be the second and last entry from director Steve Miner, who a year prior would helm the first Jason-led instalment Friday the 13th Part 2. Perhaps the purest and best conceived slasher in the series, Part 2 is held in high regard by many fans, particularly those who prefer Jason’s serious 2-4 period, though the fact that Part 3 can be referred to as serious perhaps says more about the goofy instalments that were made during the latter part of the decade. But those who prefer their horror of the violent and cynical variety have nothing to fear. Despite its shift towards annual gimmickry the movie retains much of that early hardcore formula and seems to strike the perfect balance of sheer brutality and hokey good fun that would make a notoriously uninventive series so irresistible. The movie can be ludicrous but also ruthless as hell, and for many Steve Miner’s vision is the most authentic.

Though the movie’s central gambit proves something of a disaster, there is actually a lot to excite fans of the series, so much that Part 3 is a contender for being the most important instalment of the entire franchise. As I have already mentioned, this is the one in which Jason procures his legendary mask, a commercial hook without which there may not have been a Part 4. It is also the first time we get to see our killer as something more than a POV stalker as the franchise furthers its goal in making Voorhees the star of the show. This is thanks in no small part to superlative Jason Richard Brooker, whose lumbering frame and docile manner make him arguably the most ominous incarnation in the series, giving us an animal who shares the raw savagery of a mountain bear and the head-cocking inquisitiveness of a small puppy.

The movie is pretty graphic too, managing to escape the period of heavy cuts that would afflict subsequent instalments. This results in some ultra-creative, often brutal slayings that will have gorehounds salivating. Even some of the 3-D moments are inspired when it comes to the film’s kills, Return of the Living Dead practical effects artist Allan A. Apone doing a fantastic job in the continued absence of Tom Savini (Savini would be rehired for The Final Chapter after missing out on Parts 2 and 3). It wasn’t an easy process either. Lining up objects in an accurate enough way to make the notoriously tricky 3-D camera effect work was a daily hardship, as was coming up with viable ways to utilise a technology that cost an estimated $10,000,000 dollars to set up in 1,079 theatres across the US. That’s why we get a series of innocuous 3-D effects that seem to have no real purpose within the context of the film.

In spite of some miraculously woeful acting, the film is also relatively well made; not original by any means, but proficient, while goofy fodder such as the Hitchcockian Crazy Ralph replacement and a gang of hackneyed bikers will likely leave you in hysterics in the most unintentionally hilarious sequel in the entire franchise. Part 3 also features one of the most memorable final girls in the series in Dana Kimmell’s Chris, a bold and beautiful character who has the rather impressive distinction of escaping Jason’s wrath on two separate occasions, standing head and shoulders above the majority of teenage fodder reduced to notches on an axe handle. There is also sympathetic class clown, Shelley (Larry Zerner) to consider, memorable for being the first truly annoying Camp Crystal kid in the series, the kind of character that would become a prerequisite thereafter. Only in the Friday the 13th franchise could a character and actor of his profile achieve the kind of cult status among fans that is still going strong today.

Those of you who admire series composer Harry Manfredini’s iconic original score may also be in for a surprise. This time he eschews the usual knife-edge strings for a synth-heavy disco score more in the Goblin vein. It doesn’t have the macabre element that Goblin themes typically harbour. In fact, it’s pretty bonkers; the perfect accompaniment for a film that frolics in the self-aware waters of some out-there wilderness. A cynical punt at longevity this instalment may have been, but it more than serves its purpose, and for the first time in the series you will find yourself rooting for our bloodless killer as a cast of equally bloodless stereotypes succumb to Jason’s annual chop.

Fans of the franchise are really spoilt for choice here: a 3-D eyeball shooting out of a crushed skull, a long-range harpoon shot through the eye of a hapless vixen, but the award has to go to the brutal slaying of posturing gymnast Andy Beltrami, whose well-deserved slaying while assuming a handstand position results in a corpse of squeamish proportions. Next time you go and get yourself a beer, be sure to walk on your feet, if not for the sake of your life for the sake of your dignity.

Again, many to choose from here — far too many. Some bird’s eye view juggling, anyone? How about a striking viper or a leaping rake? Not gruesome enough for you? Okay, how about this: some kids are playing baseball in the road as a van full of teens pulls up beside them. The kid closest to the camera draws his bat in preparation for the swing. The bat protrudes through your television screen by about an inch. That is all.

The Moment Jason Became the Star

In perhaps the best 3-D moment on offer, Jason strolls inquisitively towards his lake-bound victim, cocking his head like a puppy who doesn’t quite understand its owner’s command. Then POW! — a harpoon through the eyeball lays her to rest in the most casual yet unexpected fashion, but more important is the manner in which Brooker’s Jason slowly lumbers away in search of his next victim. For the first time in the series we see our killer plain as day, his identity no longer confined to the prerequisite climax, and thus a star is born.

Knocking Stephen Spielberg’s colossal hit ET: The Extraterrestrial of the top of the US Box Office charts, Friday the 13th Part 3 became the second highest-grossing horror movie of 1982 behind Tobe Hooper’s Poltergeist, a movie that Spielberg was also directly involved with. It was also the first 3-D film to receive a wide domestic release, sparking a mainstream mini revival of the 3-D format.

Actually, this instalment is relatively witty, but of all the grin-inducing puns this industry in-joke is perhaps the freshest. Tubby prankster Shelly has just pulled off some practical effects magic by pretending to be a bloodied corpse.

Andy: Goddammit, Shelly, why do you always have to be such an asshole?

Shelly: Sorry. And I’m not an asshole, I’m an actor.

Perhaps not the most original in the series, but Friday the 13th Part 3 is a notable addition for reasons unrelated to its shoddy 3-D gimmick, and for me the most important for the continued prosperity of the series. If Part 2 introduced us to one of trash horror’s most iconic creations, then this instalment set the bar for the antagonist-led brutality that would prove such a low-budget smash. 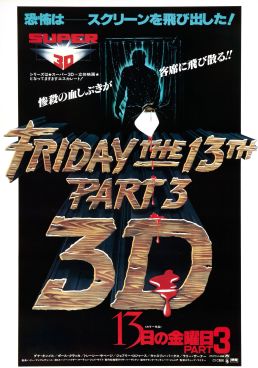 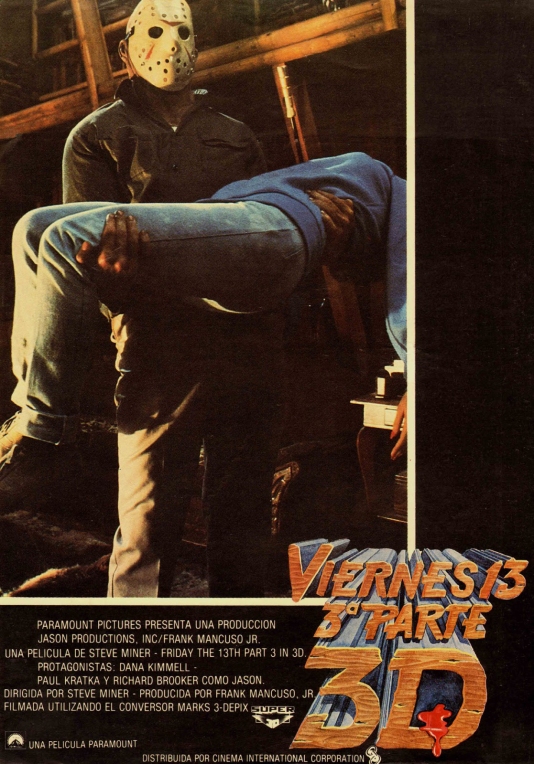