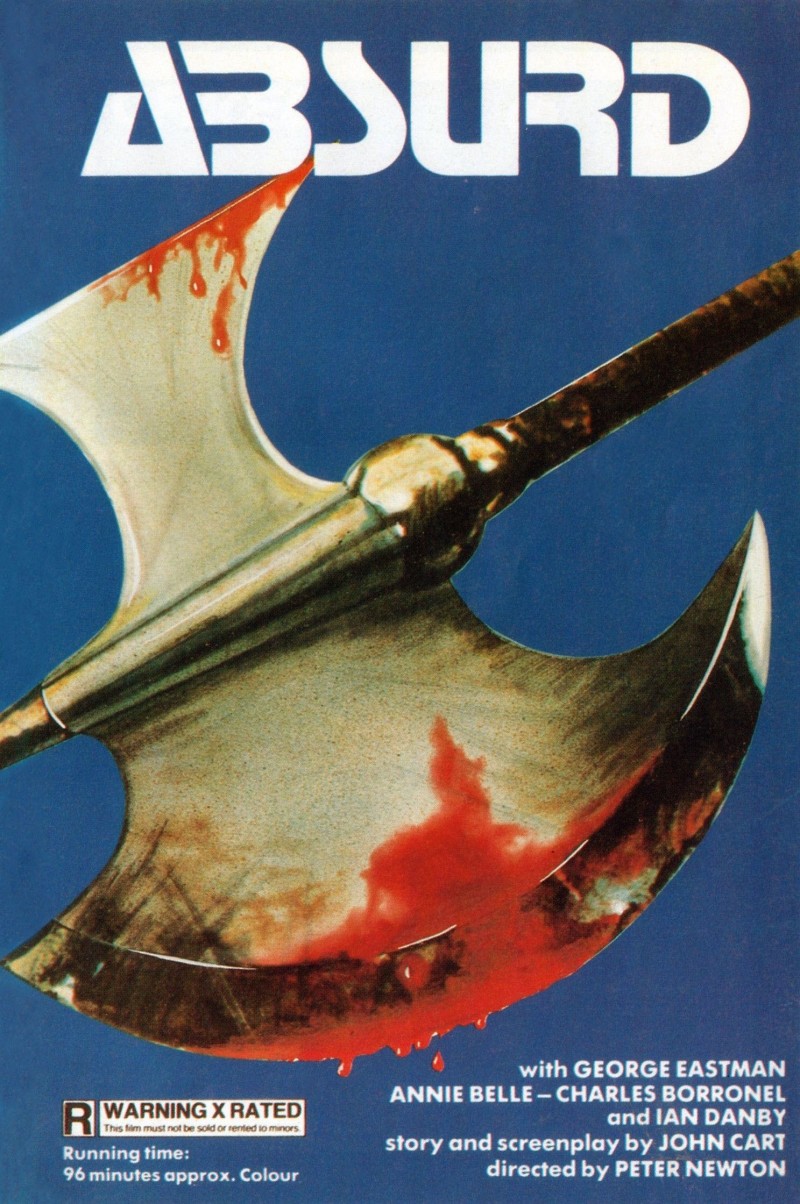 There is nothing particularly absurd about Joe D’Amato’s cynical exercise in slasher filmmaking; in spite of its reputation, it’s actually a pretty bog-standard affair. Gaining notoriety as one of the 72 ‘video nasties’ deemed unfit for public consumption, and even making it onto the list of 39 titles successfully prosecuted under the Obscene Publications Act, it is a transparent derivative of John Carpenter’s Halloween, leeching off its popularity without ever quite figuring out what made that movie so effective in the first place. Far from the agonizingly-paced slice of subtlety it aspires to emulate, the movie is little more than a platform for a series of graphic murders that leave you feeling empty rather than scared, with hardly barely a hint of humour or self-awareness, but perhaps that was the intention.

Back in the early 1980s, the pre-certificate home video market provided a new platform for independent filmmakers, and with so many under-the-radar movies flying off the shelves, it was impossible for the censorship boards to keep pace or indeed be aware of them. The likes of Romero and Carpenter had shown us that talent and ingenuity can go a long way in covering up for a lack of financial punch, and given the right marketing strategy and technical nous careers could be forged and a mint could be made. For those lacking the expertise and foresight necessary to succeed on their own merit, it was the marketing aspects that proved vital, and nothing attracts the masses like a little notoriety, something former hardcore porn distributor D’Amato had a long and storied history in.

As a consequence, investors were lining up to take part in the VHS revolution, leading to a period of exploitative smash-and-grab filmmaking that eschewed creativity and technical panache for by-the-numbers derivatives that set out to make their name based on shock value alone. One movie that can attest to the will of producers was John McNaughton’s notorious quasi slasher Henry: Portrait of a Serial Killer. McNaughton was backed by a Chicago home video executive who expected a Friday the 13th clone for his meagre outlay. What he got instead was the kind of devastating character study that divided audiences and critics alike, a movie that was refused a release damned to commercial purgatory along with a director who would struggle to find work for the rest of his career. It didn’t matter that ‘Henry’ was superior to just about every low-budget horror to come out of the ’80s. McNaughton was tasked with making a breadwinner, and, consciously or otherwise, he failed.

As director/producer of the equally controversial Absurd, D’Amato was under no such delusions. The movie was a tenuous follow-up to his previous effort Antropophagus, another movie banned outright following the Video Recordings Act of 1984. D’Amato has directed so many movies (almost 200) that his output is close to that of Walmart, and for the most part just as efficient and unremarkable. The guy is no joke, he can direct just fine, and when it comes to nonsensical smut there is arguably no finer peddler, but when it comes to effective horror filmmaking he lacks the charm and panache of some of his fellow Italian directors, and Absurd suffers from some pretty serious pacing issues. Not that it mattered to horror freaks already knee-deep in the kind of pre-certificate scuzz that had split their imaginations like a head-buried hatchet. It was the sordid gallery of deaths fans craved, the kind that were circulated like an anarchic game of Chinese whispers.

The plot is almost identical to that of Carpenter’s Halloween: an escaped maniac goes on a brutal killing spree before stalking two kids and a babysitter. Back in 1978, Michael Myers had a very specific and believable reason for stalking Jamie Lee Curtis’ surprisingly resourceful babysitter. Absurd‘s rampaging boogeyman, Mikos, has no such reason. He just randomly shows up. In fact, everything about this movie is random, and the fact that we are never able to make a connection with any of the characters kills the tension dead. It’s murder for the sake of it; filmmaking at its most literal and rudimentary.

Like Myers, our killer is nigh on indestructible thanks to a medial quirk that sees his blood coagulate at a quite incredible rate, giving him an almost limitless capacity for recovery. The crux is that the killer’s brain deteriorates at a similar rate, plunging him ever deeper into the realms of insanity, and it seems that only a priest (Edmund Purdom) has the knowledge to bring this madness to an end as he does his best Dr. Samuel Loomis impression for a group of dubious detectives.

In terms of shock value and nihilistic imagery, the movie excels. A doctor’s drill, a bandsaw and an oven are just some of our killer’s weapons of choice as he lurches from victim to victim in a cotton shirt and sneakers, growling like a dull-witted mountain bear and exuding none of the mystery that forges the very best horror villains. Our killer is played by D’Amato go-to guy George Eastman, who would also pen the screenplay in the vein of an American slasher after rejecting the original, which was a more direct sequel to Antropophagus in the Italian mode. One can only imagine the state of that script.

Technically, the movie is efficient but rushed, perhaps an indication of the director’s phenomenal output, and some of the film’s tension-building scenes were in need of some serious TLC. There are plus points: some convincing practical effects and a wonderful score by Carlo Maria Cordio which really hammers home the nihilistic vibe that the movie lives and dies by, but time has deprived the movie of much of its outrage, and a twist ending, cleverly echoing the ‘video nasty’ hysteria of the day, seems to come out of nowhere and has no lasting impression.

Still, thanks to the furore surrounding the whole scandal, the original Medusa pre-certificate home video release is one of the rarest and most sought after artefacts for VHS collectors. Sometimes it really is what’s on the outside that counts.

After wandering into a local abattoir, killer Mikos Stenopolis (Eastman) wrestles a worker’s head onto a worktop and proceeds to tear it in half with a bandsaw. A tepid version of the infamous death in 1989‘s Intruder, but the best Absurd has to offer.

A colossal fail in editing sees our incapacitated heroine attempting to release herself from some medical equipment for an inordinate amount of time, killing all tension dead. Meanwhile, an unfortunate young woman is pushed into a lighted oven, an excruciating scene worthy of its ‘video nasty’ stature.

After the deranged Mikos is sedated at the hospital following a series of horrific acts, Sgt. Ben Engleman feels it is the appropriate time to partake in a little lighthearted flirting with an on-duty nurse.

Sgt. Ben Engleman: Come on, when is a nice looking girl like you ever alone? And especially at night.’

Nurse: You’re kidding, Ben. This town’s a graveyard. I wish you’d run after me. At least you’re a bachelor.

Sgt. Ben Engleman: That can easily be arranged. Just murder someone and I will.

Like many slashers released in different forms for different countries, Absurd would adopt many different titles: Rosso Sangue, Anthropophagous 2 Monster Hunter Horrible, and The Grim Reaper 2. These titles were simply marketing gimmicks designed to sell the movie on a false promise. One version even featured an incorrect description of the movie in order to cash-in on the hugely popular zombie movies of the time.

If you like your murder blunt and meaningless, then you will probably get a kick out of D’Amato’s dull and nihilistic slasher. If, however, you like your horror tense or ironic with relatable characters and genuine scares, you may want to look elsewhere. In 1981, morbid curiosity would have made Absurd a must see. Almost forty years later, it has proven anything but.