There are generally two types of slasher fan: those who prefer the overtly humorous and those who prefer their horror dead-eyed and bloodthirsty. In 1982, director Amy Holden Jones did a fine job of blending the two, delivering the kind of grainy slice-and-dicer synonymous with the slasher’s golden age while sending up the genre with it’s phallic imagery and self-aware dialogue. This was lost on some critics, who saw Slumber Party Massacre as yet another Halloween clone looking to cash-in on the sub-genre’s explosion in popularity, and in some ways they were right. Many critics had denounced the entire slasher canon as a misogynistic exercise in cynical slaughter. With Slumber Party Massacre, Jones gave us a satire on masculinity in horror, the complete antithesis of those reviled by genre naysayers. The fact that it marketed itself as a straight-up slasher in order to meet commercial targets was perhaps its biggest crime.

By 1987, the slasher film was a completely different animal. Many were castrated by the censorship powers that be, resulting in visually tepid outings that defeated the purpose of a sub-genre built on creative violence. Others took on a more humorous, self-reflexive approach, replacing those violent extremities with slapstick action and the kind of eyebrow-raising quips that made them mush less offensive tonally. The majority were not subtle like the original Slumber Party Massacre. The humour was generally overt, so in your face that many slasher fans gave up on the genre. That same year, horror icon Fred Krueger became the genre’s first bona fide rock star, A Nightmare on Elm Street 3: The Dream Warriors giving us a wisecracking villain who retained just enough of his wicked streak. A year later, A Nightmare on Elm Street 4: The Dream Master would become the most successful ‘Nightmare’ instalment to date, Renny Harlin’s practical effects extravaganza wowing audiences the world over, but for those who preferred Krueger’s darker incarnation, it was the beginning of the end for the character as a figure of fear, Freddy’s flirtation with tween-oriented commercialism killing the horror dead. Krueger, more than any other character, was indicative of mainstream horror’s shift in tone.

If it were not for Krueger’s commercial metamorphosis, it’s unlikely that Deborah Brock’s Slumber Party Massacre II would have ever existed. The late 80s spawned all kinds of A Nightmare on Elm Street rip-offs designed to cash-in on the character’s booming popularity. Everything from Andrew Fleming’s Bad Dreams (1988) to Claudio Fragasso’s absurd, Italo-sleaze slasher Night Killer (1990) had a pop at it in one way or another. Hell, Wes Craven himself gave us a tech variation on the Freddy character with Shocker‘s back from the dead killer Mitch Pileggi. But of all the movies looking to hitch a ride on the Krueger freight train, Slumber Party Massacre II may be the most transparently derivative. It doesn’t have the imbecile with the rubber mask and razor-fingered glove (also rubber) like Night Killer. In fact, the movie’s villain is rather different aesthetically. But conceptually the film couldn’t be more on the nose, which is probably the main reason why producers bought into this ambitious, yet haphazardly judged slice of slasher hokum.

First of all, the movie gives us an antagonist who plagues our heroine’s nightmares, using her fear to draw him into reality, a place where he can have his wicked way with a fictional girl group and a couple of generic douchebags looking to get their dicks wet. Not only that, it gives us a villain whose weapon acts as an extension of his evil, one that takes centre stage as he reels off inane puns that have neither the wit nor the bite of the ‘Nightmare’ series. Sure, the original Slumber Party Massacre did this too, but here the phallic drill becomes a phallic drill attached to a guitar, a symbol of the MTV-oriented horror popularised by Krueger. So transparent are the similitudes that the movie even seems to make a direct reference to Craven’s phenomenon by giving one of its characters old pizza face’s notorious surname. Slumber Party Massacre II has garnered quite the cult following in the years since its release, and I can totally see why, but for me the film became rather tiresome rather quickly, and I can usually sit through just about anything the horror genre has to offer quite comfortably.

The plot is standard Krueger fare. Courtney (Crystal Bernard), the younger sister of the first movie’s protagonist, is all grown up and suffering from the kind of viscera-strewn nightmares that threaten to bleed into reality, and when she and the rest of her rock band plan a salacious sleepover, the inevitable massacre ensues… eventually. The movie’s first 45 minutes consist of inane interactions, impromptu pop performances and the kind of subliminal violence that offers nothing of any substance. The Bava-esque, neon colour palettes, which were everywhere in low-grade horror productions during the late 1980s, are pretty much redundant here, the film’s frenetic editing and subliminal fancies leaving you more confused than anything, teasing the arrival of our killer for far too long. In the end, that’s the movie’s biggest flaw: it’s inability to go anywhere with any kind of urgency or conviction. Even its quirky flourishes fall flat for the most part. Brock’s decision to have every character look directly into the camera may work for unconventional, first-person sitcoms such as Peep Show, but here it all seems shallow and tacked-on and generally counterproductive.

Slumber Party Massacre II does provide its fair share of gross-out moments that will keep fans of violent schlock amused, with severed hands, phallic penetration and the kind of gargantuan teenage zit that just won’t quit (man, I feel queasy just thinking about it). But the movie’s bizarre driller killer (Atanas Ilitch) is the real draw. A leather-clad rockabilly landing somewhere between Shakin’ Stevens and Billy Idol, Ilitch’s purely farcical creation will no doubt please some viewers, though a series of repetitive kills and an inexhaustible catalogue of rock song references will drive others to the brink of insanity (it certainly had that effect on me). This feeling was further exacerbated by the character’s spontaneous bouts of knee-jerking, which play out like a pop video magazine. This is Saved by the Bell tumbling down the creative rabbit hole, and its flabby deviations prove more infuriating than anything.

I get the feeling this is one of those films that people will either love or hate; a curio that will delight and displease in equal measures, depending on your predilection. I usually have a soft spot for such absurd delights, but as much as I was looking forward to Slumber Party Massacre II, its inimitable brand of wackiness just didn’t appeal to me. The movie succeeds in appealing to the MTV generation, but with no real plot or characterisation to sink my teeth into, the whole experience came across as ineffectively offbeat and rather hollow. Unique, yes, but sometimes Unique just isn’t enough.

All the drill-related deaths are spuriously similar, using compensatory close-ups to disguise the movie’s lack of budget. A scene in a which a victim is drilled through the chest during sex is perhaps the most memorable, but only because the actor in question closely resembles a young Jim Carrey, which to me was the funniest part of the entire movie.

Slumber Party Massacre II aims for off-the-wall, and it doesn’t waste any time getting there. After the kind of boringly sensual opening that belongs in a softcore sex guide, Brock flips our expectations with a subliminal montage of graphic violence, the first indicator that this movie is about to break all the rules. An audacious concept, one that reminds us that rules are there to be broken, but understanding what not to break is just as admirable, and infinitely more important.

It turns my stomach having to recount this scene, but here goes… Entertaining Sally’s typical teenage tribulations regarding an invisible pimple, Courtney has the most ridiculous and ghastly dream of the entire movie, a marvel of cheapo make-up that sees Sally’s head turn into a bubonic bag of puss, one that explodes and gushes all over our heroine like a gooey syrup. Yuk!

With nothing too memorable beyond the obvious ‘Light My Fire’ and ‘Satisfaction’ lyrical references, here is just one example of the kind of confusingly inane dialogue that features throughout. Our all-female band have just taken part in an unlikely cushion fight which has left their semi-naked bodies covered in feathers.

Though ambitious in terms of presentation, Slumber Party Massacre II is an unevenly plotted mess which makes a 77-minute movie seem three hours long, and though there are enough gimmicks to make this a cult hit for many, I just didn’t buy into it. That said, others may see things differently, and director Brock is nothing if not brave. 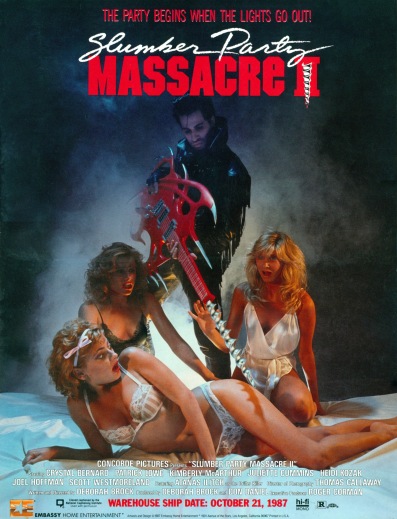