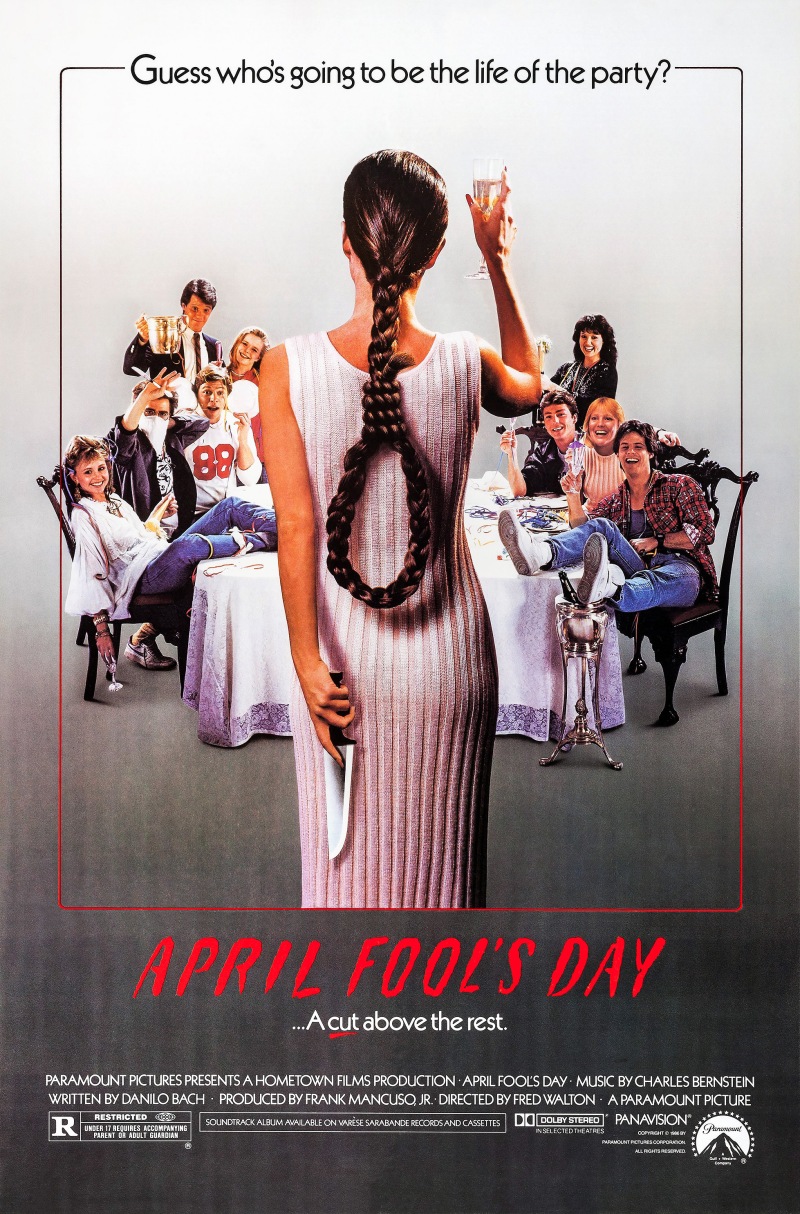 Tagline: Guess who’s going to be the life of the party?

I have mixed feelings about April Fools Day. Part of the reason goes back to my childhood and outside interference, and though this shouldn’t effect my overall opinion of Fred Walton’s somewhat innovative slasher, I find it rather difficult to cast those past events aside. Before I explain the reasons for this little curio I must first address something: April Fool’s Day lives and dies by its twist, and since that twist is essential to my little quandary, those who haven’t seen this movie should stop reading now. If you know the twist going in, chances are it will spoil the whole experience, and not just in the traditional sense. Go into it blind and you’re almost certain to have fun, though the revelation in question may leave you feeling rather disappointed.

Without giving too much away, watching April Fool’s Day left me with a feeling similar the one I had after watching the hugely divisive Friday the 13th Part V: A New Beginning for the second time. First time around it’s your typical Friday the 13th movie, rather heavy on censorship thanks to the impositions of the MPAA and Paramount, but you get to see Jason bumping off a batch of vacuous teens, which is essentially what fans pay to see. But then it hits you with a revelation: this time it’s not Jason committing the murders at all but rather an impostor killer. At first I felt cheated. Sure, I got to see some stuntman bounding around in a hockey mask, same as always, but knowing it wasn’t Jason devalued everything that came before. Over the years, A New Beginning has grown on me, and I can appreciate it as what is essentially an X-rated Scooby Doo mystery with its tongue firmly in its cheek, but April Fool’s Day is a different animal.

I first heard about April Fool’s Day back in high school. I was roughly thirteen at the time and a friend came to class all excited, though his eyes told the story of a particularly late night. The reason for this was a rather unusual slasher showing on late-night TV that he had somehow managed to stay the distance for — lucky, since he had ultimately experienced the greatest twist he had ever witnessed. I was eager to learn more, knowing full well it would ruin the movie for me, and he set about explaining the plot of April Fool’s Day with the kind of play-by-play detail that only a child deems necessary. Being a horror fanatic, it all seemed like standard slasher fare, but then he hit me with it, not only a twist but a double twist, one that I found ingeniously fresh and anarchic. This time around, I was somewhat underwhelmed by a movie that had once been a momentous endeavour in cinematic chicanery.

Looking back, not only was April Fool’s Day clever, it was commercially savvy. That same year, Tom McLoughlin had reinvented Jason Voorhees as an indestructible meta killer who resembled one of the Universal monsters of yore, partly to overcome Jason’s supposed demise in Friday the 13th Part IV: The Final Chapter, but also to give the movie the kind of edge the censorship guillotine had done away with. It was still cut to ribbons, but an increased emphasis on humour meant that it didn’t rely so heavily on the graphic extremities once synonymous with the series. April Fools Day takes a similar approach, but it makes one fatal error. A New Beginning may have swapped Jason for a man who underwent arguably the quickest, most unlikely emotional breakdown in horror movie history, but slasher fans still got what they came to see in a series of grisly deaths. In April Fools Day, everyone dies yet no one dies, and by the end you may as well be back at the beginning.

Of course, there is a very distinct reason for this: April Fool’s Day is missing its entire third act. In Danilo Bach’s original screenplay, the second act would end with the revelation that the utterly convincing and dubiously orchestrated gallery of deaths was actually an April Fool’s prank that let the rest of the gang in on the joke victim-by-victim, which in the finished movie is actually the third act. The original idea was for one of the gang to completely lose it, pissed at being the victim of such a cruel and elaborate prank and beset on a very real rampage that would go largely ignored thanks to a familiar case of The Boy Who Cried Wolf. That’s why the infamous and completely deflating double twist was tacked-on, one that sees one of our guests seemingly take revenge on Muffy for her elaborate charade, only for us to realise that this is yet another prank thanks to a high-tech practical effects knife that you would struggle to find outside of a Hollywood studio.

It was years until I found out about this rather telling bump in production, and suddenly it all made sense. Still, April Fools Day left me feeling rather hollow this time around. It begins admirably enough, as a group of teenagers set sail for a private island owned by their friend Muffy (Deborah Foreman) with designs on tearing it up. It doesn’t take long before disaster strikes. While fooling around in the water following one of the most realistic-looking accidental murder pranks this side of Tom Savini, one of our motley crew has his face crushed by the boat’s edge, a gruesome incident that leaves his eyeball dangling from his cheek as he’s immediately rushed to the hospital. Our cast don’t seem particularly perturbed by this tragedy and carry on partying like nothing has happened, but this stroke of gross misfortune is just the beginning. Soon, bodies fall thick and fast as our host begins acting rather strangely, slowly transforming into a teenage version of Annie Wilkes from Misery, and when a series of clues leads us to the plainly obvious, our two remaining survivors are up against it, or at least they think they are.

In the echelons of slasher tomfoolery, April Fool’s Day is a relatively well made film, and partially to its detriment. The movie features a couple of ’80s faces that immediately lend proceedings a certain pedigree: the always watchable Thomas F. Wilson, who just a year earlier had almost stole the show as preferential McFly scourge Biff Tannen in Robert Zemeckis’ cult sci-fi flick Back to the Future, and slasher royalty Amy Steel, who for my money is the best final girl in the Friday the 13th series, and she is equally luminous in this flick, in spite of a much weaker role. Compared with other slasher fodder, April Fool’s Day actually attempts to give its characters personality, which seems somewhat futile for a movie of its nature. It has shades of George Pollock’s 1965 Agatha Christie adaptation Ten Little Indians but lacks the substance, though it does benefit from a typically inspired score by A Nightmare On Elm Street composer Charles Bernstein. This may sound strange, but April Fools Day often tries too hard to be an actual movie instead of simply embracing the silliness.

Still, April Fool’s Day is arguably the most unique, commemorative event slasher since John Carpenter’s Halloween, and it’s something of a shock that people didn’t think of it sooner, though two other movies set on April Fool’s Day would be released in the ensuing months in Killer Party and Slaughter High. It may be light on violence, which is what slasher fans invariably clamour for, but it certainly stands out from the crowd and has garnered quite the cult following in the years since its release. Still, one can’t help but wonder how the original script would have played out onscreen. Presumably it would have precipitated those long, character-building scenes, as well as ditching that incongruous and wholly ineffective final scare. It also would have given us what is the staple ingredient for all slasher pictures. When you think about those elements which are essential to the formula, a unique weapon comes to mind, a scary disguise, a worthy final girl, the nature of the movie’s onscreen deaths. One thing you don’t think of is the act of killing itself, and why would you? What would ever possess anyone to make a slasher in which precisely no one dies? It defeats the entire purpose.

Ultimately, Paramount felt that axing the entire third act for a tinkered finale would end things on a high note that would please audiences. Clearly they hadn’t met many slasher fans.

It’s pretty slim pickings in the gore department, and since nobody dies for real this category almost seems redundant. In fact, because of the rather large red herring in the room, all of the movie’s supposed deaths are committed off screen barring the final reveal, which sees Leah Pinsent’s Nan creep behind a drunken Muffy and slice her throat as she stares intently at a jack-in-the-box left on her bed. To be fair, it actually looks pretty gruesome until the two begin laughing inanely. Oh well!

The whole plot is one giant absurdity. First of all, how would a regular teenager devise such a catalogue of pranks and make them work. Seriously, with all the prosthetics and booby traps and carefully revealed fake slayings, April Fool’s Day makes Kevin McCallister’s Home Alone antics seem like pure child’s play. What makes things even harder is, of all of her high school guests, only Muffy is in on the prank from the very beginning. You’d think one of the gang would have protested along the way. I mean, if you’re finding dead bodies and realistic looking decapitations all over the place, how long before you reach for a real weapon and do some actual damage? That original screenplay is making more and more sense by the minute.

After spying sunbathing beauty Nikki (Deborah Goodrich) on her lonesome, unscrupulous, money-crazed hick Harvey goes in for the kill:

Harvey: Y’know what I find amazin’? Muffy’s her real name. I mean, my name’s Harvey but they call me Hal, so I figure Muffy must stand for something… Muffin?

Slicker than an oil slick on the Texas Panhandle.

Having recently learned of the movie’s crudely axed third act, it is difficult to criticise April Fool’s Day. After all, the decision to drop the most vital part of a movie in favour of an executive-friendly finale was out of creative’s hands. Still, I can only judge what I am presented with and a slasher with a total of no kills just doesn’t sit right with me. You think A New Beginning pulled the rug out from under you? Well, to paraphrase another famous prankster, Wait ’til you get a load of this!