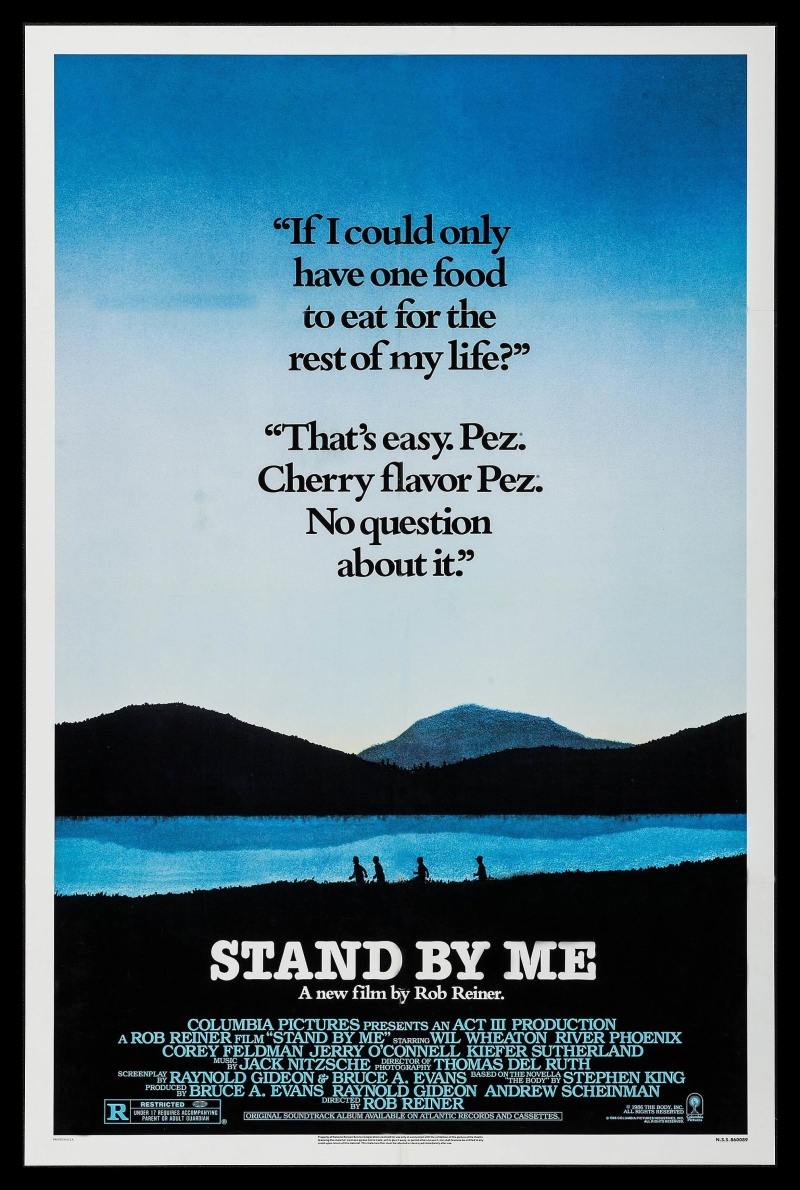 VHS Revival walks the tracks with a masterclass of period nostalgia

It is somewhat ironic that one of the most nostalgic movies of the 1980s acquires its sense of sentimentality from an entirely different era. Based on Stephen King’s short story The Body, Stand by Me is an intoxicating ode to the 1950s, with a tragic underbelly that belies the myth of what on the surface might be considered simpler times. The film explores the malevolent side of small town life and the roles we are bequeathed in a claustrophobic environment that breeds togetherness, and as a result segregation. It is the story of four small-town boys and their abrupt transition from childish passivity to stark self-realisation; a tale of alienation and togetherness, of pain and conflict and personal resolution. It is also one of the finest movies of the decade.

Stand By Me was directed by Rob Reiner, who would later adapt King’s bestselling horror novel Misery. By 1986, the prolific writer had already seen an incredible eleven of his works adapted for the silver screen, including superior efforts Carrie, The Shining and The Dead Zone — movies directed by such cinematic royalty as Brian De Palma, Stanley Kubrick and David Cronenberg. That’s a lot to live up to, and after King was treated to a screening of Stand By Me he immediately left the room shaking. Just imagine Reiner’s initial response to such a reaction. King had been openly critical of Kubrick’s take on The Shining, which he believed tarnished the arc of its lead character, and shaking was often a sign of anger. He needn’t have worried. When King finally returned he told Reiner that Stand By Me was the finest adaptation of his work he had ever seen. Period. 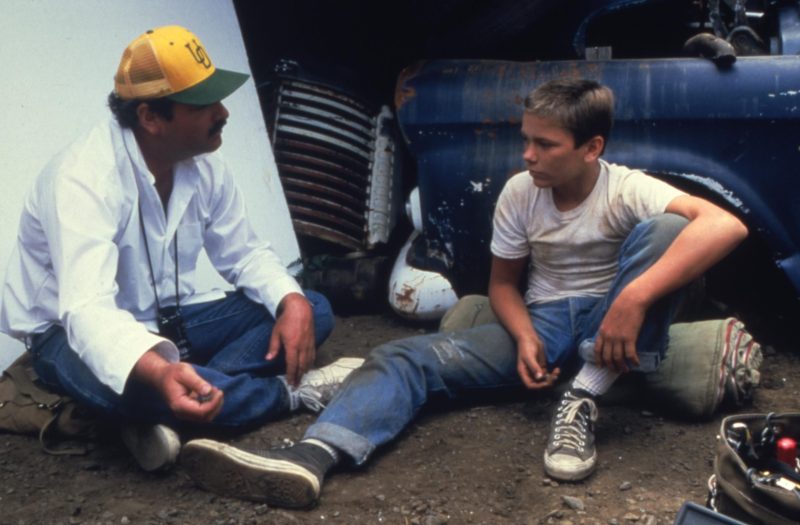 Key to the film’s success are the quite remarkable performances of its largely juvenile cast. Though Gordie Lachance (Will Wheaton) might be considered the movie’s protagonist, it would be unfair to say that any one of the four deserves more credit — though River Phoenix is particularly mesmerising as unwilling miscreant Chris Chambers, a burgeoning black sheep whose unabashed display of sadness in a scene which poignantly outlines his own personal conflict is really quite astonishing, unmasking the the insidious tendencies of a community seeped in hypocrisy. Due to a tragic drug overdose at the tender age of 23, Phoenix is one of those mythical figures whose legacy is built on ‘what ifs’. As human beings we love to glorify the dead, making prophets out of mere mortals, but based on this performance alone it is clear to see that the boy was a very special talent indeed.

Mr Lachance: Why Can’t you have friends like Denny?

Mr Lachance: What, a thief and two feebs?

The level of performance delivered by our young cast is in no small part due to the people skills of director Rob Reiner, who would often go to great lengths to achieve the desired effect. The actors involved have each attested to Rob’s ability to communicate his vision, but according to the movie’s bonus documentary it wasn’t all fun and games. Actor Jerry O’Connell, who plays the group’s whipping boy, Verne, spoke candidly about the infamous train scene that saw his character blubbering like a baby as he raced towards a more immediate freedom. In reality, he was unable to project the required emotion of facing a quick and impending death, and Reiner resorted to savagely scalding him for his efforts. What you see onscreen is very much a genuine reaction.

O’Connell was not the only one to benefit from the director’s influence. During the campfire scene, when Chris finally breaks down under the pressures of victimisation, Reiner suggested that the young actor recall a time in his own life when an adult had let him down, and Phoenix would later have to be comforted for real. Corey Feldman, a free spirit who Jason Voorhees portrayer Ted White described as “a mean little kid” after his experience with him on the set of 1984‘s Friday the 13th Part IV: The Final Chapter, has gone on record as saying that of all the characters he has played, Teddy was actually the closest to his personality, yet another testament to Reiner’s people skills. Though he didn’t realise it at the time, Will Wheaton would credit the filmmaker for teaching him the meaning of the term “an actor’s director,” while Kiefer Sutherland extolled the virtues of Reiner’s ability to “allow you to discover a moment when in fact he’s telling it to you.”

A group so young would require such expert guidance for a screenplay that is rich in characterisation. In the movie, our four friends are caught in their own personal traps. Gordie is the overlooked child whose All-American brother was killed in a car accident, an incident that only solidified his position as the family’s ‘invisible boy’.  His parents don’t hate him as his fragile mind strains to imagine, they are just uncaring, unaware of his own talent as a writer and motivated entirely by the interests of a community that anticipates your every move. Another reason Gordy’s father disapproves of him is the company he keeps and how that reflects on the family name, and his callous description of Chris, Verne and Teddy only serves to highlight the problems facing four kids who will never be allowed the chance to grow beyond the town’s misconceptions.

The boys don’t have to look far to see what life has in store for them. Chris only has to look as far as his elder brother, ‘Eyeball’, a faux-miscreant who exudes the kind of smug, self-confidence that contradicts his role as hanger-on. Eyeball oppresses those who expect to be oppressed. He behaves exactly as he is supposed to, wearing his dime-store infamy like the scar that mars his face and embracing an ugliness there is simply no escaping.

His role model in life is the town’s true delinquent. Ace Merrill (Sutherland) is the casual scourge who lingers on the corner of every town, the kid who was pushed too far and whose only solace lies in the destruction of other wilting spirits. Ace may be battle-hardened, but his Draconian strength was forged from a similar weakness, the kind that threatens every nameless birdbrain to come out of the woodshop, and if you are unable to escape the prison that incarcerates his soul, you’ll be paying him for the rest of your life. King is a master of sketching characters that relate on a universal level, variations of which appear in much of his work, and when dealing with kids bullies are typically key to the growth of his protagonists. King himself was bullied as a child, and those he sketches are not the kind who are cowardly or easily deterred. They are sadistic, psychotic and borderline murderous, and Ace is no exception. In order to stay in character, Sutherland would often bully the boys for real off camera, and his resultant performance is often mesmerising.

Against all of their emerging hardships, our young cast remain boys for one last defining journey as they set off to find the dead body of a kid their age. Like most nostalgia pictures, the memories facing the movie’s narrator ― a now successful writer who is led down memory lane by a sudden and unexpected tragedy ― are the stuff of half-truths, cushioned by the bubble of myth and imagination that protects children from the often brutal and sobering nature of a reality they are unprepared for. We all have those stories, those that imbue life with a sense of the fantastical and which we often cling to in later life, recalling with great, synthetic warmth the heady lens of adolescent perspective. The most memorable of these concerns the local junkyard dog, Chopper, an unseen beast with a cringing appetite who lurks in the shadows of juvenile myth, only to emerge as a golden pup of cutesy proportions. Lurching closely behind we have the junk man himself, a flagrant reminder of the realities lurking beneath, an ogre who goads a rambunctious Teddy Duchamp and reminds him in great detail of how his father was not the war hero his idealistic nature clings to, but a loony up in the nuthouse who almost burnt off his ear.

For a movie that possesses an almost effortless ability to inspire fondness, this is deeply sobering stuff, and though the obstacles pile up as they are drawn toward their symbolic goal, the four kids manage to maintain a sense of the mercifully naive, particularly ‘fat kid’ Verne and the self-destructive Teddy, whose attempted train dodge reveals his own demons in a way that clearly evades him. Mercifully, such feelings are suppressed beneath facile issues of dubious prominence. The outcome of imaginary battles between superheroes dominates their fundamentally macabre journey, while the true identity of cartoon character Goofy remains a topic of almost scholastic interest. Best friends Gordie and Chris are more conscious of their unravelling world, sharing in bouts of well-meaning aggression and explicit sadness that elevates Chris’ role as the surrogate father of not only his closest friend, but of the whole gang.

Gordie Lachance: Did you take it? [the milk money].

Though Gordie finds his situation harder to cope with, Chris is the true victim of Castle Rock, the kid tarred with the familial oil who others oppress with the aim of elevating their own place in society. So isolated is he that even his teacher pinned the blame on him for stealing the milk money from school, safe in the knowledge that her mean-spirited accusations would stick. On the surface, he is just another bad apple from the rotting cart, when in reality his persecution has succeeded in creating an anomaly: a capable, sympathetic young man who possesses the kind of selflessness that is alien to his community. And perhaps they sense this. Perhaps it is this veracity which leaves them at pains to smother his wilting potential. 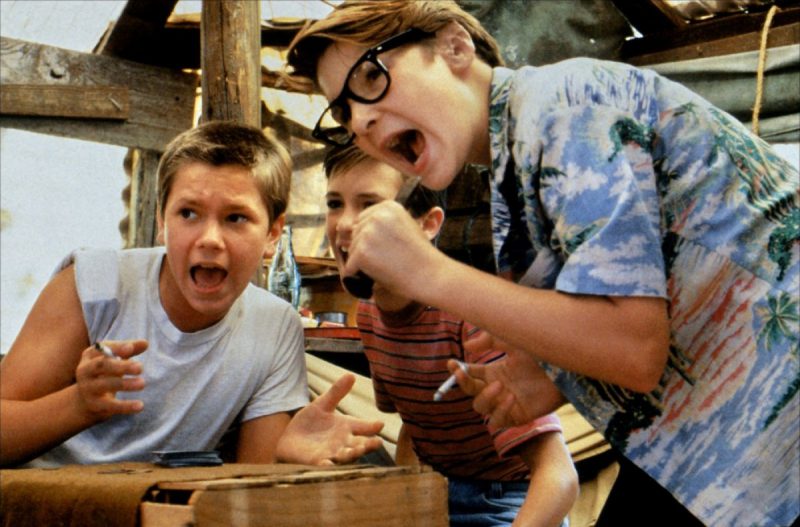 Such material has the potential to be even darker, but in spite of its hardened skin Stand By Me remains a joy to behold. It may have all the hallmarks of an author who specialises in horror, but whenever I return to it I do so with positivity. Imbued with a sense of watercolour nostalgia, it is sharp and witty, tender and poignant, with some of the most memorable and rewarding dialogue of the decade. Who can’t relate to inane discussions about their favourite cartoon characters, about choosing candy as your all time favourite meal or the first stirrings of a libido, and those rare moments of incalculable beauty that adulthood promises to deliver?

Above all the turmoil and angst and desperation, those are the abiding memories I have of the movie, the ones that seem to shine through in spite of it all. Stand By Me is an often devastating film that highlights some of the most troublesome aspects of the human condition, but whenever I think of it I invariably think of those lighter moments, and they never fail to leave me smiling the way they did when I first discovered its magic, back when I was of a similar age and those characters spoke to me in a way that I can no longer fathom. 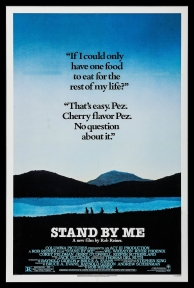 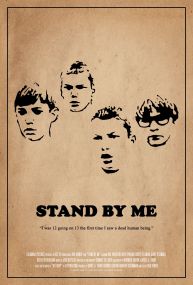 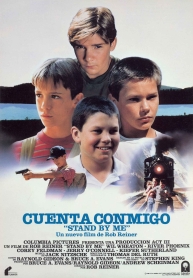