A comedic masterpiece with a performance for the ages: welcome to the wacky world of A Fish Called Wanda

A Fish Called Wanda may be a largely British production, but it is an American who ultimately steals the show. This is deliciously ironic when you consider the competitive nature of the movie’s characters, a gang of zany caricatures who go to great lengths to snatch some swag from under each others’ noses, but irony has always been a staple of British comedy, an element of the fabled sophistication that puts our multicultural cast at loggerheads. This is British pomposity vs American showmanship, the inescapably prudish vs the bold and the brazen. The fact that most of these characters would not exist anywhere in the world doesn’t matter. The formula thrives on absurd stereotypes, and it works quite wonderfully.

You would be hard-pressed to find a comedy of this nature in today’s crude and shock-driven climate. Here you have a cast of comedians who are not only well schooled in the art form, they wrote chapters in the rule book, while a couple of Yankee first-timers exceed all expectations. The movie stars Monty Python’s John Cleese and Michael Palin, and there are sketches that are reminiscent of that show’s farcical style, particularly during a series of scenes in which Palin’s stuttering assassin, Ken, is assigned to dispose of an an elderly witness, a task which proves quite the ordeal for an animal lover who winds up neck-deep in dead pooches. 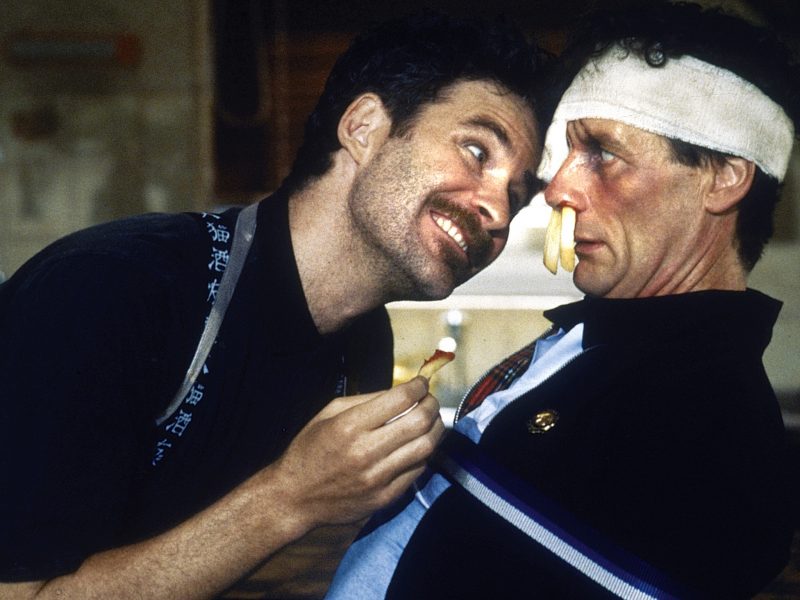 Palin gives the kind of colossal performance one would expect, while Cleese, delightfully ingenuous as preyed-upon barrister Archie Leach, plays a much more reserved character than we are perhaps used to, but there are flashes of the frantic and flailing Basil Fawlty here too, most notably in a scene where a suddenly liberated Leach dances naked in an apartment, only to be interrupted by a family who have recently leased the property. Not only are the parents appalled and dumbstruck, they are the very same who sold him his family home, and the only thing in reach to cover his exposed genitalia is a portrait of the awestruck matriarch.

Archie – How very interesting. You’re a true vulgarian, aren’t you?

Otto – You are the vulgarian, you fuck.

The movie’s plot centres on a bank robbery and descends into a farcical romp of lies and betrayal, but this is merely a plot device for a series of exemplary comedy set-pieces which draw on the casts’ vast experience in situation comedy, descending into the kind of terrestrial romp that often proves unflattering on the silver screen, but which works like a charm thanks to a diverse cast of characters who achieve the most unlikely onscreen chemistry. Particularly the movie’s fated leads.

Archie Leach is a downtrodden barrister with a frosty wife and spoiled brat of a daughter, a maelstrom of doddering manhood in a borrowed kingdom of highly-strung femininity. He has long-since accepted his role as the family’s perfunctory provider, a position of vanity which is completely impotent due to his wife’s vast, inherited wealth. Polite, gullible and bereft of zeal, he is the typical British male in the minds of those who have never actually visited the country.

Archie’s sugar-spun redemption comes in the form of Wanda (Jamie Lee Curtis), a sassy hellcat with a fetish for foreign accents and an insatiable appetite for wealth, one that seems tied to notions of freedom rather than greed, a predilection that proves their ultimate commonality. As Wanda sets about stealing the loot for herself while her gangster lover stands trial, she smooches up to Leach with the aim of obtaining information, but after she loses the key to the loot’s safe deposit box she is forced to up the ante, and as a consequence begins to fall for the man who she initially describes as “kinda cute in a pompous sort of way”, before informing jealous boyfriend Otto (Kevin Kline) that she’s “not into necrophilia”. At the time, Wanda probably means what she says. She is a woman drawn to danger and excitement, lying and cheating for the sheer thrill of it, but in the end it is Leach who proves the perfect antidote, a man who appreciates her for those qualities, as well as the more obvious kind.

Wanda – You just wanted to get me into bed.

Archie – I fell in love with you.

Wanda – How come you dumped me then.

Wanda – Say something in Russian.

A former scream queen most famous for her role as Laurie Strode in John Carpenter’s Halloween, Curtis was not known for her comedy pedigree, but she could not have asked for better guidance, and she excels as the insatiable Wanda, her libertarian fervour lighting up proceedings. The character of Wanda was never supposed to be American, but Curtis made such an impression on Cleese that he altered the screenplay to accommodate her. “I didn’t think I was going to make Wanda American until my daughter took me out to see Trading Places,” Cleese would say during an interview in The Making Of. “And Jamie walked on the screen and I said ‘who is this girl?’

The casting of Wanda was the last piece in the puzzle, but the movie’s true unsung hero was director Charles Crichton, a veteran director who had been put out to pasture more than two decades prior by an industry that had seemingly left him behind. Cleese, who was a big admirer, felt differently, and would even credit himself as co-director in a move that he would call an act of “subterfuge” on his part, explaining, “I knew the studio would be worried about Charlie’s age. I don’t know anything about how to direct…I simply prayed that Charlie would be on the set every morning. He shoots in a way as to convey the essence of every scene.”

Crichton was in on it from the ground floor up. When Cleese first approached him about making a film way back in 1982, all Cleese knew was that he wanted to write a scene in which a man with a stutter struggles desperately to give in formation. They had know idea what the movie was going to be about and planned to take things slow. All of this culminated in the kind of collaborative effort that shines through in A Fish Called Wanda, as Crichton himself would explain, “We had a week of rehearsals and then a gap of two weeks in which to incorporate any new ideas which had been thrown up and to polish the script. I think this is the ideal way to work, with everybody contributing their special talents and feeling they are part of the film.”

Ironically, the movie’s stand-out performance comes not from one of its veterans, but from a relative rookie who would bag a Best Supporting Actor Oscar in an environment which seemed to place him out of his depth. Kevin Kline plays mentally challenged American assassin Otto, a man who smells his own armpits for motivation, a pseudo-intellectual who uses meditation techniques “that the Buddhists used before they went into battle”, and who believes that the London Underground is a political movement. But call him stupid and he’ll ‘rub you out’. Kline’s is a performance of great energy and enthusiasm, of immaculate timing and physical inspiration, and as soon as we lay eyes on his farcical demeanour, we know we’re in for something quite prodigious. Masquerading as Wanda’s brother, his discretion is essential to the surreptitious couple’s task, but as soon as he arrives on the scene he is boisterous, brash and belittling, immediately jumping on Ken’s debilitating stutter with a flip relish that exemplifies his contempt for his fellow man ― particularly those of the stuck-up, British variety.

Otto – I love robbing the English. They’re so polite!

Otto is aloof to the entire world, but the downtrodden Ken proves the easiest and therefore most satisfying of victims. When Ken almost walks in on he and Wanda in what would appear to him an incestuous situation, Otto is quick to pounce, leading the easily manipulated Ken out into the hallway and proclaiming his deep attraction toward him, one that he continues to ham up with an ever-increasing sense of glee. Lines like “I love watching your ass when you walk”, and, “Don’t go near him, he’s mine!” leave Ken feeling just a little uncomfortable, while tender kisses passed from finger to nose leave him irrevocably distraught. Later, when he wants information from Ken about the whereabouts of the loot, Otto resorts to eating his precious pet fish, and in his element as a sadistic bully almost grows to like it. 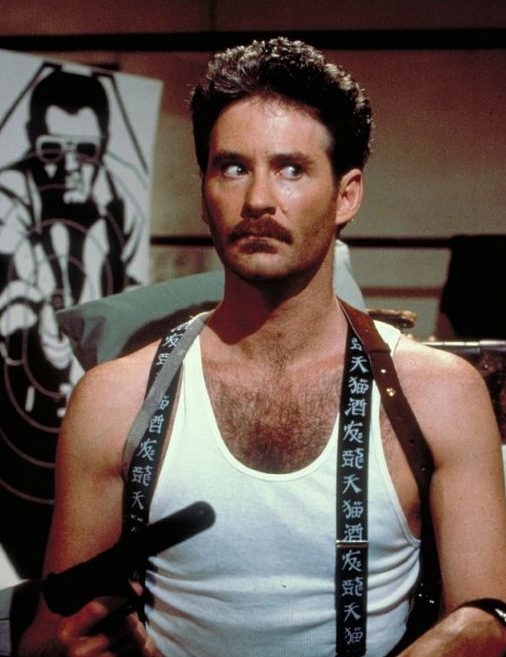 As superior as he imagines himself, Otto is little more than a pretentious buffoon, and it is for this reason that such a cruel and arrogant character can be so endearing, a testament to Kline’s ability as a comedy actor. Otto is opinionated, jealous, and completely lacking in humility, and we love him for it. His bumbling ineptitude, the kind that completely betrays his cultured facade, is central to the movie’s comedic power, and when he is forced to swallow his pride and lie for the good of the scam, he is even worse, bursting into expletives when practising an apology or introducing himself as Harvey Manfred… jen… sen… den of the CIA when trying not to blow his cover.

A Fish Called Wanda is one of the great comedies of modern cinema. The plot and themes may be trite and predictable, but that is exactly the point, as are the sweeping stereotypes which pass for characterization. Ultimately, it is about great timing and performances, about chemistry and camaraderie and a host of talented individuals relishing in the task at hand. It is about enjoyment. Not only for those of us watching, but for those taking part, and at the end of the day that’s what comedy is all about. 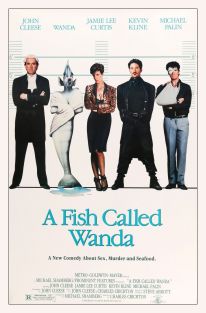 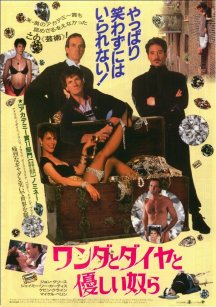 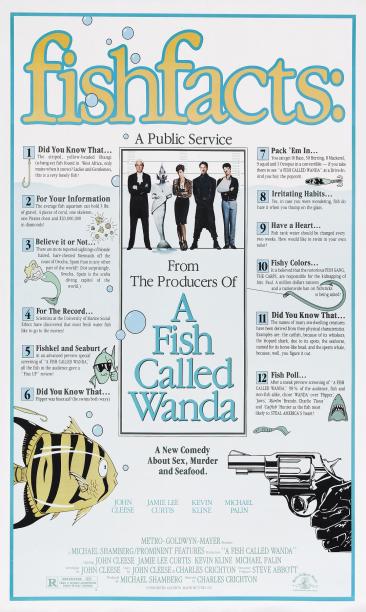