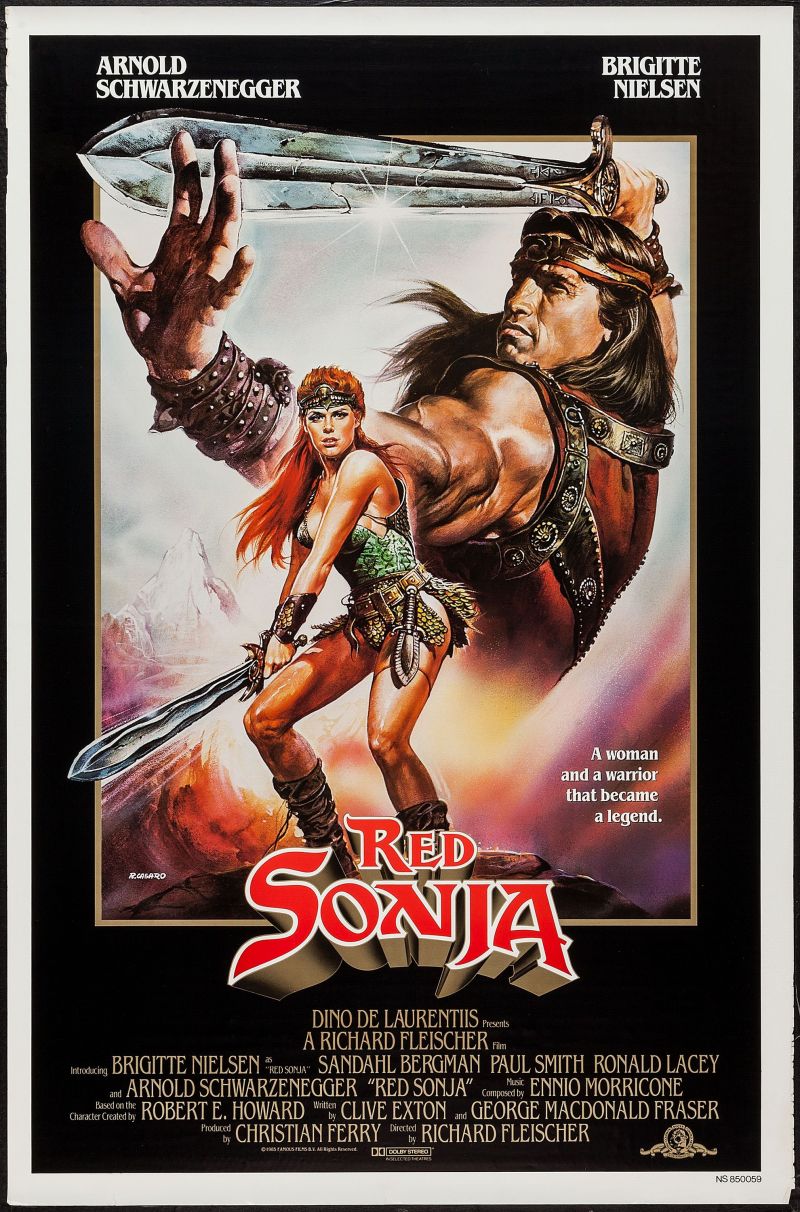 The eighties were awash with fantasy films. Some were excellent (Conan The Barbarian, The Princess Bride), some were flawed but entertaining, (Krull, Willow), while others were just boring or just downright awful (Hawk The Slayer, Conan The Destroyer). It was a glorious time for swords and sorcery fans, and though the quality may have been wildly variable, as a budding Tolkien fan obsessed with anything with even a passing resemblance to the fantastical that featured weird creatures, a quest of some description or a teensy bit of magic, Red Sonja, released in 1985 to almost universal derision, was perfect rental fodder for my pulp-addled top-loader.

Hot off the back of Conan the Destroyer, 1984’s pedestrian follow up to John Milius’ ultra-violent Game of Thrones template Conan The Barbarian, Dino De Laurentis saw a further opportunity to cash in on audience interest. Red Sonja, a readymade Hyborean Age barbarian comic set in the Conan universe, contained all the appropriate ingredients necessary for a similar concoction.

The film, produced by De Laurentis, whose variable English Language CV up until this point included everything from the 1976 remake of King Kong to David Lynch’s misguided adaptation of the Frank Herbert novel Dune (1984), was helmed by Conan The Destroyer director Richard Fleischer, and would attract a superfluity of industry talent, including composer Ennio Morricone and one-time Federico Fellini production-designer Danilo Donati on set design duty.

And so the stage was set for yet another sashay into adventure territory, only this time the character in the spotlight would be a female rather than a male warrior. The Red Sonja portrayed in the movie is based on the flame-haired, bikini-clad warrior originally envisaged by writer Roy Thomas and artist Barry Windsor Smith for Marvel Comics in 1973. Using a mash-up of the peripheral Robert E. Howard character, Red Sonya of Rogatino, first featured in the short story Shadow of the Vulture, and another Howard creation, Dark Agnes de Chastillon, the Marvel duo relocated Sonya to the pre-history setting of the Hyborean Age, swapped out the ‘Y’ for a ‘J’, and so was born the ‘most beautiful and fearless woman in Hyrkania.’ 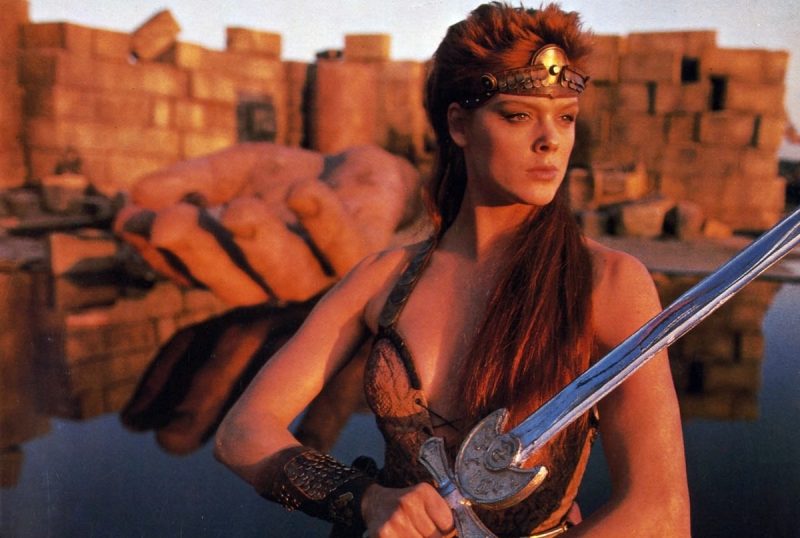 Whilst not strictly a follow-up to the Conan movies — the filmmakers didn’t have the rights to include the Conan character, despite the fact Arnie turns up looking just like he did in Conan — the film exists in the same space as those earlier movies, but has more in common with Fleischer’s own Destroyer than it does John Milius’ superior Barbarian.

Right from the get-go Red Sonja is a wildly overblown and utterly ludicrous adventure fraught with bad dialogue and riddled with clichés. The film kicks off with one of the most incoherent expositional episodes ever: Sonja is introduced in a heap on the floor in front of a burning building while being visited by a ghost. The spectre, a poorly animated smudge-like emanation, then proceeds to explain Sonja’s backstory to her — presumably she has no idea of any of her recent history at this juncture.

It soon becomes apparent that the Evil Queen Gedren killed Sonja’s family after Sonja spurned her advances, that Sonja was raped by Gedren’s soldiers, that Sonja sliced the queen’s face, leaving her with a massive scar to tarnish her beauty, and that Sonja survived though nobody knows how. The ghost smudge goes on to provide some vague, arbitrary career advice via a motivational monologue, setting Sonja on a revenge quest to avenge her murdered family (cut to Arnie on horseback for the duration of the credits).

In what amounts to the film’s 3rd false start, the action then shifts to a monastery, where warrior priestesses are engaged in an ancient ritual. Here the film’s MacGuffin is introduced, a low-budget kryptonite knock-off called The Talisman, at which point the audience becomes aware that a unilateral decision to drop it into a well conveniently located in the middle of the monastery has been taken to avoid evil folk getting their mitts on it. All of the priestesses are then slaughtered in the film’s best action sequence, and the evil queen and her ludicrously attired retinue make off with the glowing orb in order to embark on world domination, leading the man-hating personality vacuum that is Sonja on a quest to seek revenge and fulfill her destiny.

Kyobo: ‘Hatred of men in a lovely young woman, such could be your downfall…’

The film could have swapped the conservative patriarchal worldview established by the Conan movies for a strong female lead, but  the film insetad repeats the tone espoused by its predecessors, and continually reinforces it for 88 minutes. Almost from the outset, it becomes apparent that the film has no intention of promoting female empowerment; Red Sonja, in terms of gender equality, is about as progressive as a Trump rally. At varying points during its running time it is chauvinistic, misogynistic, homophobic and exploitative, and during her cliché-ridden voyage of self-discovery, the only thing Sonja discovers is just how desperately she needs a man’s validation.

Arnold Schwarzenegger, meanwhile, as wandering power-lifter Kalidor, is the personification of male superiority. Whilst Sonja is reduced to the role of a chainmail-wearing swimwear model, unable to crawl out from under the shadow of her male protector, Kalidor’s preeminence is repeatedly affirmed. Sonja’s teacher Kyobo tells her to be nicer to men at the start of her quest, thus underscoring the film’s dismissive and unsympathetic attitude toward victims of sexual assault. Gedren’s lesbian tendencies, meanwhile, are considered reflective of her corruption, while High Lord Kalidor, or Conan The Chauvinistic, depending on your perspective, spends half his screen time trespassing Sonja’s scenes. Whenever Sonja is in peril and the odds are stacked against her, Kalidor drops in to conveniently offer his support, which results in her escape and an increase in affection.

To add insult to injury, even marketing gave Arnie top billing in spite of a role that was fairly limited. Brigitte Nielsen’s titular protagonist ceded status. She features on the poster, but is overshadowed by her co-star. Arnie, who reportedly agreed to complete a cameo role out of a sense of duty, ended up on-set for a month, featuring in more of the film than was intended, though to his eternal credit he was reportedly quite angry when he realised Nielsen was to be shunted to make way for him at the summit.

Kalidor: ‘I know you’re a brave girl, but danger is my TRADE!’

Having established the fact that the plot is ridiculous and the gender politics troubling, special mention must also be made regarding the acting on display. Previous productions such as John Milius’s Conan The Barbarian and James Cameron’s The Terminator made a virtue of Arnie’s limitations. By acknowledging his inability to act and focusing on the physical aspects of his presentation rather than his capacity for complex dialogue, the filmmakers were able to elicit credible performances. Not only did he not look stupid, but his performances were suited to the characters he was playing.

In Red Sonja, Arnie displays the emotional range of a lamppost, randomly popping in-and-out of scenes to justify his pay-check, while mumbling inanities and sexist incoherencies. Arnie himself cited Sonja as the worst performance of his career. He also claimed that whenever his kids were naughty he would threaten to send them to their room to watch the movie ten times over, after which he never had too much trouble with them.

Brigitte Nielsen, in her big screen debut, was also utterly unconvincing as the eponymous flame-haired warrior. Playing the ‘she devil with a sword’ as a disapproving passion-void, her difficulties with English were as obvious as her dye job. Interestingly, Sigourney Weaver was first considered to play Sonja. One can only assume that she was either unaware of the fact or she read the script and retreated in horror. Sandahl Bergman, who had already played Conan’s love interest in Conan The Barbarian, turned the role down, opting to play the villain to avoid being typecast, and the part eventually fell to Nielsen, who had never acted before landing the role off the strength of a single screen test.

Nielsen’s lack of experience is evident from the off. Fans of the comic book, who were expecting a mischievous, aggressive, intelligent, sword-swinging representation of their beloved heroine, were to be sorely disappointed. The actor’s lack of emotion and inability to engage the audience, coupled with an Arnie performance so woeful even Mr. Freeze seems accomplished, completely sank the movie. It also served to render the underdeveloped love interest between the characters of Sonja and Kalidor laughable. Here was a romance so devoid of emotional credibility there were moments when it felt like a parody rather than a dramatically involved relationship.

Support performances didn’t help matters any. Prince Tarn (Ernie Reyes Jnr.) is a self-obsessed and highly irritating kung-fu brat, manservant, Falkon, (Paul Smith), has less personality than the dinosaur bone he uses to knock enemies over the head with, while a host of pantomime villains round off the cast, including the aforementioned Queen Gedren (Sandahl Bergman,) Brytag (Pat Roach), and Ikol, played by Ronald Lacey.

It speaks volumes of the magniloquent script (which, oddly enough, was partially penned by George Macdonald Fraser, whose Flashman novels were a damn sight more impressive) that not even Lacey as Gedren’s henchman, who did such an unforgettable job of bringing Raider’s Of The Lost Ark’s terrifying Gestapo agent Major Arnold Ernst Toht to life, was able to elevate proceedings.

Red Sonja: ‘I am under a vow, no man may have me, unless he has beaten me in a fair fight…’

It would be easy to dismiss Red Sonja as an overwrought, cliché ridden, appallingly miscast, terribly acted, preposterously attired and utterly prosaic production lacking any of the brutalist charms of its predecessors, but there are some positives to be taken from the film.

Ennio Morricone’s score, though maybe not his best composition, is not without its strengths, and is periodically enjoyable, Danilo Donati’s production design — the candle lit chamber being a particular standout — is incredibly grandiose and would have been better served by a more competent film, and cinematographer Giuseppe Rotunno does a workmanlike job of framing the narrative. The final cut of the film may be rubbish, but it is capably filmed rubbish, and that should count for something.

Brytag: ‘I will tell the future in your entrails, Red Woman!’

Red Sonja: ‘I know my future. You have none!’

Red Sonja is not the worst sword and scorcery movie on record — that dubious accolade goes to Hawk The Slayer, which is utterly turgid on every conceivable level — but Fleischer’s second foray into barbarian territory was still disastrous back in the day due to problems that are legion, and rather than mellowing with the passage of time, they have instead become more obvious.

Still, as a disturbingly entertaining reminder of just how awful some blockbuster fantasy films were prior to the release of The Fellowship of the Ring back in 2001, and viewed as a potential double bill after a few light ales with the marginally superior Conan The Destroyer, the film remains an interesting, if somewhat cringe-inducing experience, particularly since it showcases what is arguably Arnie’s worst ever performance.

The good news is that during the intervening years, interest in a more enlightened and updated iteration of Red Sonja has continued to gather momentum. Millennium films have been trying to get the remake up and running since 2008 before a production with Rose McGowan in the lead was subsequently stalled. Since the success of Wonder Woman in 2017, further interest has been paid to the property, with word that a movie is now being fast-tracked for production. 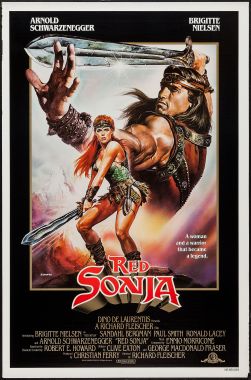 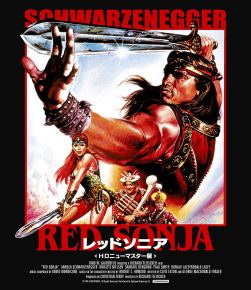