In 1986, rookie director John McNaughton was approached by a Chicago home video executive eager to cash in on the low-budget slasher craze, expecting a money-spinning slice of exploitation for his $110,000 outlay. What he got instead was a painfully authentic docudrama chronicling the everyday exploits of a deadpan serial killer, a picture that was immediately banned by the MPAA and BBFC for its explicit nature. The movie premiered at the Chicago Film Festival in 1986 and would spend years trapped in censorship purgatory. Not only did the MPAA deny ‘Henry’ an R rating, it proclaimed that no possible cut of the material could ever qualify it as such, and it wasn’t until an unrated version was released in the late 80s that the movie caught fire after impressing influential critic Roger Ebert at the 1989 Telluride Film Festival (though it would displease many more). Henry: Portrait of a Serial Killer was not the trashy slice of violence critics had become accustomed to, but an authentic representation of true horror. While an overabundance of mindless slashers served to trivialise murder, ‘Henry’ offered something that was regrettably real, that couldn’t be condemned as cynical trash or waved away with an aloof casualty. Some critics would argue whether the movie should have been made at all, but its purpose was to enlighten, not entertain, and Henry’s was a story worth telling.

The film’s lack of budget and decision to use friends and family lends ‘Henry’ a rare legitimacy, as do its grainy production values and a cast of rookie actors who exceed all expectation, helping to realise the unique vision of a young director who had previously only been involved with documentaries. With ‘Henry’, McNaughton turned a creative corner, but one so controversial he quickly became ostracised from the industry, making a total of three movies during the next decade. The most notable of those was underrated crime comedy Mad Dog and Glory, but even with the backing of high profile McNaughton fan and producer Martin Scorsese, the film would quickly fade into obscurity, and is now little more than a footnote in the crime genre’s long and storied history — much like the director himself.

Executive meddling was once again at play. Mad Dog and Glory featured an all-star cast that included the likes Bill Murray and Robert De Niro — both a huge draw in a year that saw the release of the hugely popular Harold Ramis comedy Groundhog Day and Tobias Wolff adaptation This Boy’s Life. McNaughton and producer Steven A. Jones were contractually obligated to deliver the movie with no script deviations, but following an undesirable test screening Universal demanded that the final scene be re-shot in response to audience typecasting. In the original cut, De Niro’s working stiff lawman went up against Murray’s brash mafioso boss in a bout of fisticuffs that left the former Raging Bull landing a solitary blow, something the test audience were deeply displeased with. In the movie, both Murray and De Niro are cast wonderfully against type, but in spite of how well-received the film was critically, the broader, mainstream audience just couldn’t swallow it.

Henry: Portrait of a Serial Killer is similarly against convention. From the opening image of a woman lying dead in the reeds of some unseen wasteland, we know we are in for a brutally intimate portrayal and not the slice of crowd-pleasing horror fare most had expected. Henry first appears as a stone-faced wanderer, routinely patient as a number of startling images alert us to a series of graphic murders, but we soon realise that he has an ability to charm in equal measures, drifting in and out of sincerity the way he does casual murder. So startling is one image of a semi-naked woman sitting dead on the toilet with a bottle rammed down her throat that a subsequent 1991 release — one of many problematic editions — would cut an astonishing 38 seconds of footage without consulting the director for fear that such a shocking image so early in the movie would cement the minds of an already dubious MPAA.

This particular image is not an isolated incident. Henry sees human life in an abstract manner. As far as he’s concerned people are inanimate objects, sources of interest in an otherwise mundane existence. He talks to passers-by as glibly as he discusses killing them. He makes sincere promises to people moments before leaving their corpses in a suitcase by the side of the road. When it comes to Henry, pleasantries and horror are delivered with the same icy nonchalance because he approaches both as if they are one and the same. 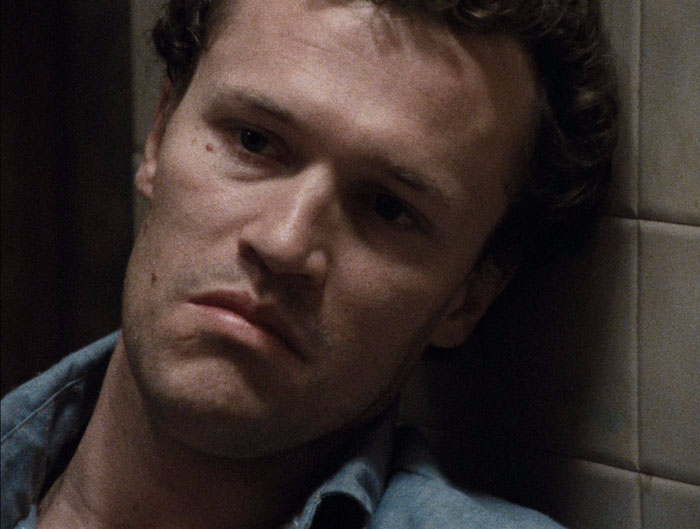 Shot on 16mm in only 28 days, the movie takes place on the grey winter streets of Chicago, Henry’s latest stop on a ceaseless and uncompromising quest for human disposal. There he meets an aimless parolee named Otis (Tom Towles), another soulless shadow brooding on the bottom rung of society. Initially, Otis doesn’t seem to possess the same remorselessness as Henry. He admits to having killed people, but only when he had no choice. When we first meet him, Otis has a perverted underbelly which never strays further than harassing the high school boys he peddles dope to, but after Henry brutally murders a couple of loose women they pick up at a bar, Otis’ horror dissipates in the time it takes them to eat a burger, and he soon slips into murder with a comfortable ease, developing a depraved taste that outweighs Henry’s for sheer sadistic pleasure.

While Otis’s lack of intelligence may go some way to explaining an absence of empathy, Henry is a different prospect entirely. Played with devastating dispassion by actor Michael Rooker, he is able to convince his accomplice of the merits of murder with an unnerving pragmatism. Cold and calculated, he is self-schooled in his ability to go unnoticed and absolutely confident of his infallibility. Without motive or a pattern to aid the police with their investigations, those like Henry can do as they please. It is people like him who are the reason for the thousands of unexplained disappearances that occur each and every year. 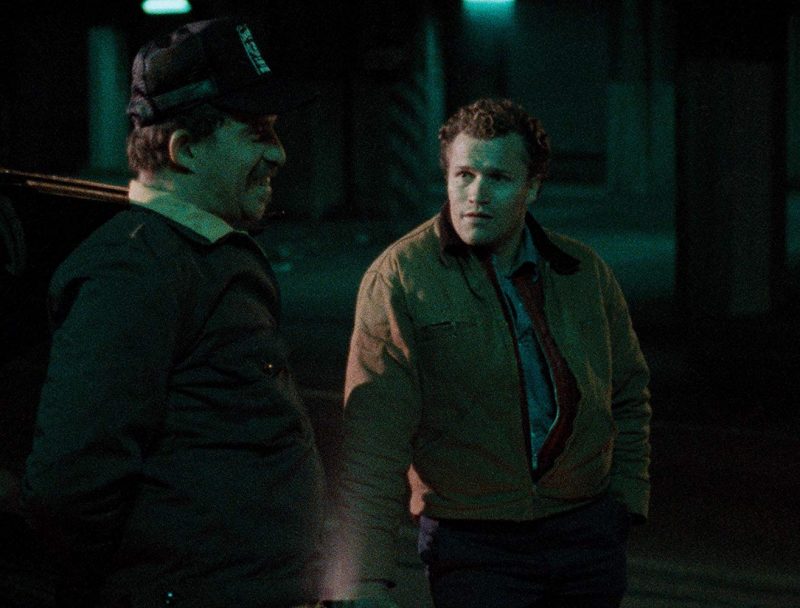 It is when Otis’s sister Becky (Tracy Arnold) turns up that we begin to understand a little more about the implacable enigma that is Henry. Tracy is a fragile ex-stripper who has fled to Chicago to find work, and is immediately taken with Henry’s straightforward nature. This is never more evident than when Henry admits to murdering his mother at the breakfast table, a blunt revelation that she foolishly mistakes for trust. Becky is the kind of troubled soul who has experienced so much hardship she longs to see the good in people, and Henry is the placid protector she has spent her entire life searching for. Becky immediately strikes you as the kind of person who is prone to ill-judgement, and in Henry she makes her most fateful decision yet.

Henry – I guess I love you too.

The characters in Henry are based on the confessions of notorious serial killer Henry Lee Lucas and accomplice Otis Toole, and although not all of what we see in the movie is accurate, there are some events which ring true. As bereft of human emotion as Henry is, he seems to have an averse reaction to crimes of a sexual nature, a fact which also appeals to Becky, who speaks frankly about her abusive upbringing with a man who seems impervious to the realities of human suffering. It is here that Henry reveals glimpses of his own past, echoing the childhood of Lucas and a prostitute mother who would make him wear a dress and watch her work.

It is this aversion to the morbidly sexual that changes the course of our character’s relationships, leading to a final twist that proves startling, catching you off-guard in spite of the movie’s relentless tone and grim inevitability. McNaughton’s debut is painstakingly brutal, capturing the anonymous drudgery of life on the fringes and the quiet capacity of those with too much time on their hands, but much of the movie’s power derives from Michael Rooker’s unflinching performance, his hard gaze simmering with an emptiness that forever borders on frenzy.

Critics have often wondered whether there is a place for this movie as entertainment, which in itself speaks volumes about the impact it has on our sensibilities. It’s ironic that theatres were only too willing to lap up the kind of perverse and meaningless violence exhibited by the likes of Jason Voorhees, while the immensely powerful and carefully controlled Henry was banished to obscurity along with a director who would be forced to find work on foreign shores. Ultimately, the movie offends not because it was meant to, or to gain publicity and sell tickets. It offends because it is all too real, dissecting a side of humanity we are often too quick to deny.

‘Henry’ will always be remembered for its notoriety, and there are some truly graphic moments here: the rape and attempted murder of Becky by her own brother, a screwdriver in the eyeball and an uninhibited decapitation, while the infamous home invasion still remains one of the most unsettling scenes ever put to celluloid. But the starkest moments are the intimate portraits of those we don’t see murdered, the harrowing sounds and explicit images of Henry’s lifeless victims, who in that moment seem to replicate his vacant grasp on human life, their final expression hinting at the kind of horrors we would much rather ignore. 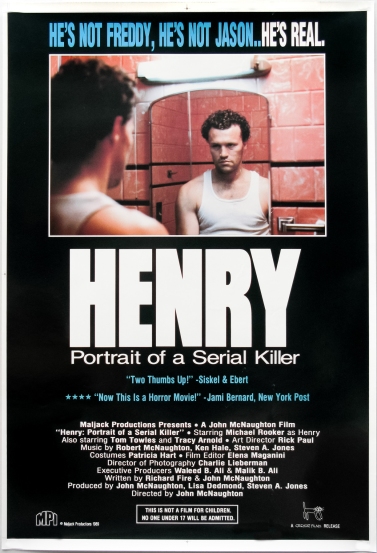