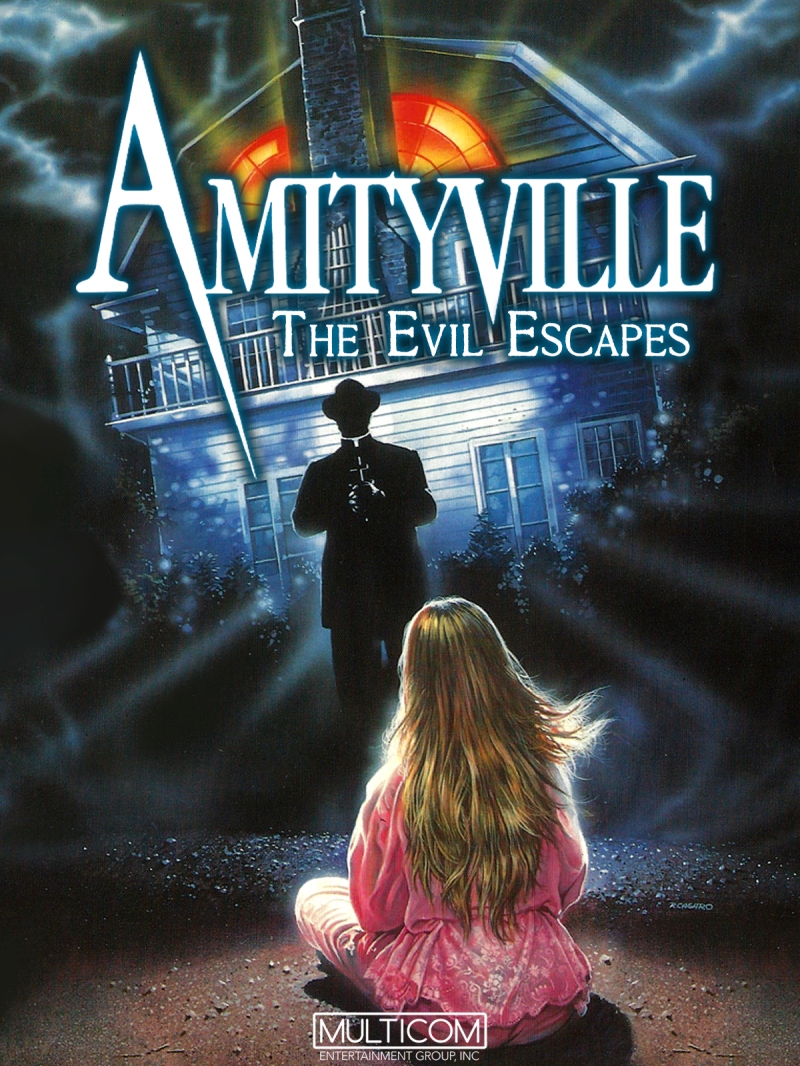 Tagline: From the creators of the original Amityville comes the most terrifying chapter…

What makes a great horror villain? A good backstory helps, perhaps an incident in a monster’s life that made them a monster, that motivates them to keep on killing, year after year, sequel after sequel. Jason Voorhees was left to drown by negligent camp councillors before magically resurfacing and wreaking bloody vengeance on a generation of teens at the infamous Camp Crystal Lake, leading to one of the biggest killing sprees the genre has ever known. Other contributing factors are a villain’s appearance (Michael Myers’ iconic mask); an interesting gimmick (Fred Krueger’s dreamworld omnipotence), or the fact that the movie’s plot, however loosely, is tied to real-life events (The Texas Chainsaw Massacre).

In 1979, The Amityville Horror got most of those elements right, though this time the villain in question was a seemingly inanimate object. The movie was based on the supposedly real-life experience of the Lutz family, who spent a total of 28 days in what has been dubbed ‘America’s most haunted house’, a time when they claimed they were tormented by a malevolent spirit beset on banishing them from the property. 13 months earlier, the house in Long Island, New York had been the site of a grisly mass murder that would inspire the book that inspired the film. Ronald DeFeo would shoot and kill six members of his family before pleading insanity, claiming that outside forces had influenced the act, but the jury were having none of it. DeFeo’s attorney, William Weber, was quick to field book proposals for his client and believed the Lutzes’ story was the perfect way to garner interest at a time when supernatural horror was rife. When the Lutz family and Weber later parted ways in a less-than-amicable fashion, the lawyer was scathing in his criticism, claiming that they were fabricating events as a purely commercial venture.

The evil house concept proved extremely popular, and the fact that the building almost resembled a face with glowing windows for eyes lent the concept a physical presence beyond flying objects and fly infestations. This would lead to a seemingly endless series of sequels and remakes of ever-decreasing value, Amityville II: The Possession proving the most memorable of an otherwise pathetic bunch. While the dark and mean-spirited Amityville II, a prequel of sorts that tapped into the events of the DeFeo case, won fans over with its grim depictions of evil and themes of incest and domestic abuse, things became rather silly rather quickly as the concept was stretched beyond any semblance of credibility. Respected critics Roger Ebert and Gene Siskel were reduced to tears of laughter while reviewing the practical effects failure that was Amityville 3-D, one of a handful of films that tapped into the Reagan-era 3-D revival and threatened to derail an already flailing franchise.

In terms of the theatrical market, Amityville 3-D did just that, but in the world of TV movies the madness was just beginning. Take 1989’s farcical NBC feature Amityville 4: The Evil Escapes, which continues the inanimate object gimmick by transferring Amityville’s long-standing evil into an everyday household lamp, one that almost resembles a human body, with stalk-like arms, cute little hands and a globe-shaped head which glows malevolently whenever residents turn their backs (didn’t your parents tell you to never trust a lamp?). It’s one thing to be terrified of a big, old house with deep cellars, dusty attics and all manner of unseen spaces, but when you’re dealing with a static lighting device and some quite ludicrous instances of SFX, it becomes just a little harder to suspend one’s disbelief, though disbelief is an emotion you’re going to have to get used to if you expect to stay the course with this one.

That being the case, I hope you do stay the course, because as an exercise in side-splitting inanity Amityville 4: The Evil Escapes is a tough one to top. The fact that it was made on a TV budget with lower expectations than the once hit franchise was used to only adds to its second-rate charms. For a start, the Amityville house, seemingly destroyed in the previous movie, makes a brief appearance, a continuity oversight that will become a mere footnote by the end of the film’s ludicrous shenanigans (that’s the kind of stupidity you’re dealing with here). The plot is a simple one: following a seemingly successful group exorcism, the newly transferred evil ends up at a garage sale where an elderly woman spies the lamp and ships it off to her sister Alice (Jane Wyatt) in California. This unexpected gesture happens to coincide with the recent death of Alice’s son-in-law, leading her estranged daughter and two children to move back in with her as they attempt to readjust, which as you can probably imagine plays right into the lamp’s hands (it has them, remember).

From there things get just a little bit kooky as youngest granddaughter Jessica (Brandy Gold) begins to form a Poltergeist-esque relationship with the lamp, believing that the object is actually her dead father thanks to a second, even crappier facial projection than the one pictured above. For a stationary beast that is plugged into a wall socket (most of the time), the lamp exhibits quite incredible abilities, turning on deadly garbage disposal switches, getting to grips with a toaster oven for typically heinous purposes, and even driving and disposing of vehicles to cover up recent murders, all from the comfort of the family’s home. And when our seemingly insentient demon, fetishized like a bulging Schwarzenegger in a Hollywood action movie, figures out how to disconnect its electrical cord and use it as a noose for unsuspecting victims, the shit really hits the fan, and not the one standing in the opposite corner of the room.

You know the budget is tight when practically every special effect costs next to zero. There are no animatronics or fancy makeup flourishes here, though you have to admire the film’s creativity at delivering passable supernatural occurrences when faced with such limitations: lights glowing on and off, a man appearing in a mirror, doors swinging back and forth, appliances turning on and off, a stove turning itself on, shot in a way that allows someone to operate it just out of shot. The cheap tactics are rife here. There’s a gloriously absurd moment when the garbage disposal switch begins to turn itself on while eldest daughter Amanda (Zoe Trilling) has her hand precariously in the plughole. It does so very slowly, as if it were trying to build suspense. The fact that it quickly switches back to avoid detection makes you wonder why it didn’t switch on that quickly in the first place. Also, would it not have been better to simply stay motionless? What are the odds that the douchbag who joins Amanda would look at the switch anyway? And even if he did, he’d just figure it was left that way, halfway between on and off. He’s hardly going to suspect an evil spirit at work.

The lamp itself is a contender for the most unlikely horror villain there ever was, and the fact that the director does everything in his power to lend the inanimate object an indomitable is just priceless. I mean, he really gives it his all here. If you prick your finger on the lamp, it’ll turn black and you’ll grow sick and die. When the housemaid grows semi-suspicious and tries to sell the lamp, it’s goodnight Vienna. The cat hates it. Flies seem to love it. It’s a truly diabolical… lamp. So fundamentally ludicrous is the notion of a murderous lamp that the movie becomes progressively ridiculous the more urgent and suspenseful it attempts to get, particularly when the vile object begins a sliding retreat under the threat of Holy Water, a scene that any bad movie fan worth their salt needs to experience at least once in their lifetime. Seeing a priest condemn an everyday household object with the straight-faced gusto of The Exorcist‘s Father Karras is a sight to behold. The fact that this movie wasn’t conceived as a spoof is just incredible.

Amityville 4: The Evil Escapes was eventually released on VHS by UK distributor Medusa, and I understand that it later made it onto DVD, but I wouldn’t hold your breath for a Blu-Ray release, which is a crying shame as far as I’m concerned (it should be our duty to preserve anything this stupid for future generations). In the end, it is up to the once cowardly Father Kibbler (Fredric Lehne) to face the lamp that left him fleeing like a little girl at the start of the movie (hovering furniture will do that to a man), banishing its evil to the confines of an even lamer carriage. Well, almost. The fact that 1990‘s The Amityville Curse, a film which featured an entirely different haunted house with a completely separate backstory, didn’t pick up where Amityville 4 left off is arguably the greatest tragedy in the entire series. If it had, it may well have been titled Amityville 5: Killer Cat. I never did trust those little bastards!

It’s not enough that our newly-possessed lamp has free reign over the house and everyone in it. Apparently, its powers are so strong that it can bump people off on the outside and even cover up the evidence, even if that evidence is not powered by electricity. Sliding under the crawlspace of Alice’s newly possessed home, a local plumber investigates the reason why a teenager’s hand was turned into liver pâté by a garbage disposal with a mind of its own. While down there, our handyman is drowned in a deluge of gunk after the kid’s hand – for some reason cleanly severed and whole – lands on his unsuspecting face. The lamp is then able to communicate with the plumber’s van and drive it back to the depot as if nothing had ever happened.

Is there no end to the wickedness?

You know a lamp is pure evil when it immediately goes after the family paraquat. But how did our inanimate object kill this helpless bird exactly? Let us analyse the evidence: Alice’s douchebag grandson finds it dead in the grill. Is it burnt? No. Charred? No. A little warmer than it should be? It doesn’t seem so. It is just dead. As perfect as taxidermy. The family are shocked and horrified, but not enough to question how it actually got there.

Following the disturbing, lamp-related horseplay at the old Amityville house, the cowardly Father Kibbler consults with his mentor as to its whereabouts.

Father Manfred: It’s possible this woman is on vacation somewhere.

Father Kibbler: Well, I hope to God she is and that lamp is sitting in a warehouse somewhere. But what if it isn’t? What if that woman is in grave danger right this minute?

Father Manfred: We could contact the police, have them visit the house.

Father Kibbler: On what basis? A satanic force has taken possession of a lamp?

One of the silliest, most rewarding made-for-TV endeavours I have personally had the pleasure of experiencing, Amityville 4: The Evil Escapes is the most redundant, terrestrial barrel of accidental laughter to ever leave me drunk with perplexity. My only hope is that you are able to find it. 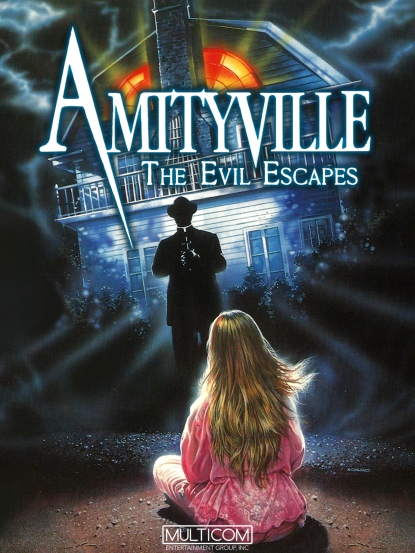 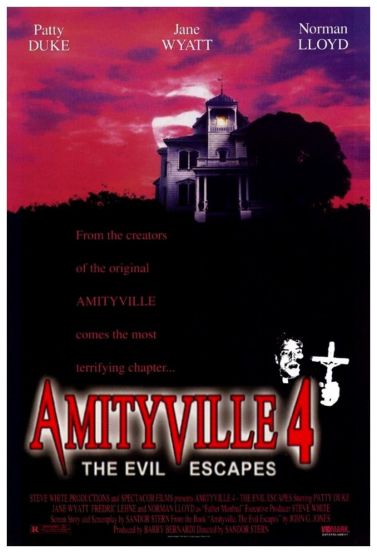