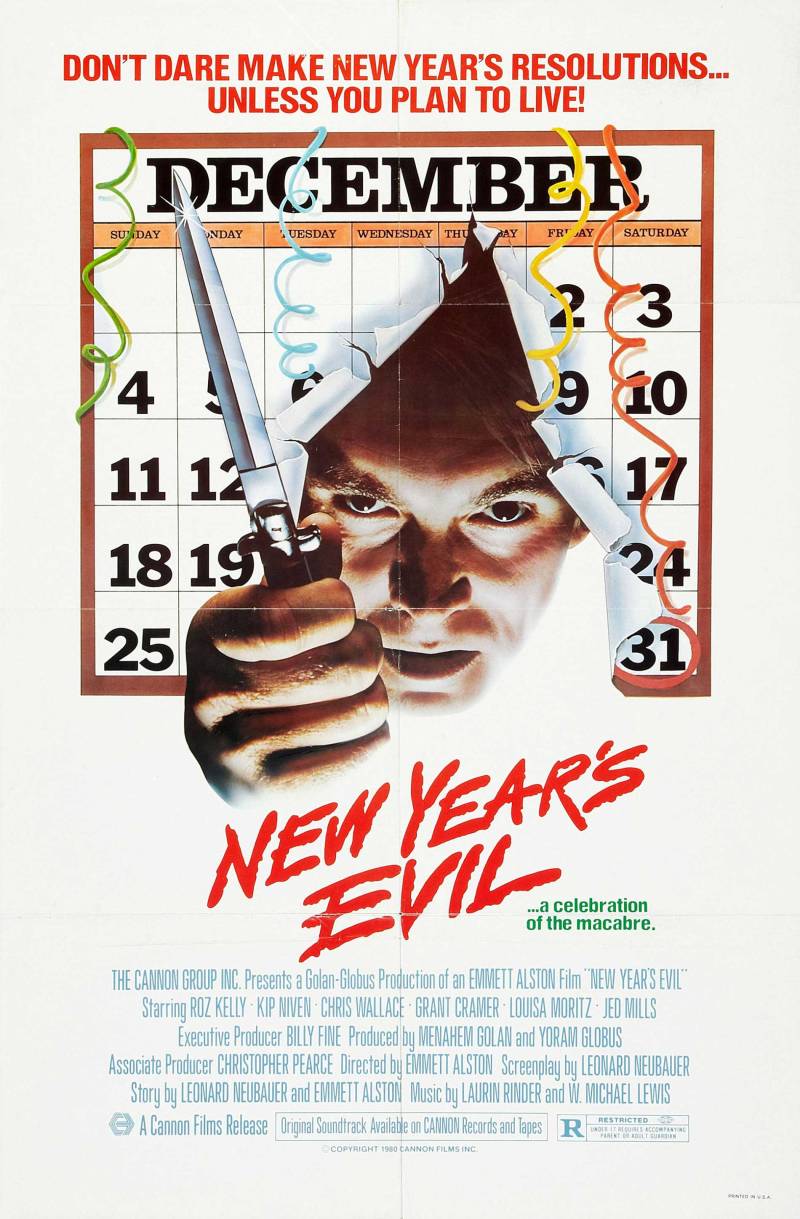 Tagline: This New Year’s, you’re invited to a killer party…

Poor New Year’s Eve, why doesn’t horror love you? By all rights, you should be the darling of the killer holiday crowd; seriously, your whole setup practically screams “slasher.” Obviously, there’s going to be a party, a bunch of pretty people boozing it up, plenty of opportunities for couples to sneak off for a little naked canoodling, and there is a built-in big reveal moment. Comparatively, though, New Year’s is a horror theme loser. There’s no point even trying to count the number of movies dedicated to Halloween, and Christmas sports over a hundred. July 4th has a strong showing on the horror calendar, and Valentine’s Day has a handful of bloody cinematic love letters. Even the comparatively square Thanksgiving can stand tall with the likes of Blood Rage and Thankskilling.

New Year’s Eve, though? I can think of three without having to scour IMDB. The most successful is probably Terror Train, and honestly, does anyone even remember it happens on New Year’s Eve when we’re so star struck by Jamie Lee Curtis and David Copperfield? Bloody New Year is more directly marketed to the holiday, but I have yet to meet anyone who has actually seen it. Then there is 1980’s New Year’s Evil. It certainly sounds promising, but having just watched it, I think it might be why no one wants to be associated with the time of the year. Trust me, no one wants to be compared to New Year’s Evil when pitching a script. You would have better luck switching to Arbor Day.

For those who haven’t seen it (most of the planet), New Year’s Evil is a thrilling tale of murder, quick-change disguises, and time zones. Diane “Blaze” Sullivan (Roz Kelly) is the host of one of those nationally televised New Wave/Punk call-in shows that were all the rage back then. Her New Year’s special is being interrupted by a nutjob caller who promises to kill a person close to her at the stroke of midnight in each U.S. time zone. The mysterious caller (Kip Nevin) makes good on his threats, using the recordings of his victims to taunt the police as he murders his way across L.A. towards his final New Year’s date with Blaze.

To be blunt, New Year’s Evil is perhaps the most misguided, poorly conceived slasher ever made. Naturally, it came from Cannon. After the success of John Carpenter’s Halloween, Menahem Golan and Yoram Globus were eager to jump on the holiday horror train. In typical Cannon Films fashion, they picked—most likely at random—a thoroughly inappropriate screenplay and handed it to an equally inappropriate director (Emmett Alston, whose only previous directing credit was a weirdo sex comedy). I’m guessing that no one involved ever watched Halloween, because this movie the farthest thing from Carpenter’s tightly scripted, suspenseful masterpiece. With its flat camera work, bumbling cops, unimaginative kills, and the murderer’s propensity for elaborate and unnecessary disguises, the movie is less a slasher, more an extra sleazy episode of Kojak with live musical performances.

Now, I’m the type who finds charm in the flaws of a low-budget, slapped together quickie, but even I was amazed by the shoddiness of this movie. There are so many bizarre, inconsistent elements that it feels like the script editing amounted to just throwing out ever third page. Even the murder-in-each-time-zone gimmick falls apart almost immediately. For one thing, it’s not clear if the murders are supposed to happen in the local time zone as the clock strikes twelve (this isn’t the kind of movie that demands logic), or if he’s just killing someone in L.A. every hour. The bigger issue is that he can’t even follow his own rules. He starts early, most of his kills are not done on the hour, and he misses two of the four time zones completely. This guy needs to work on the execution of his executions.

The most absurd thing about the movie is that the producers misinterpreted “masked killer” as “a clearly identifiable killer with a big costume trunk.” I think his outfits are supposed to tie into the victim selection. First he dresses up like an orderly to break into a mental hospital and murder a nurse (I have to admit, that’s a new one). Then he dresses like a swinger, complete with fake moustache, to pick up an airhead at a disco. All this seems like an unnecessary amount of effort, especially since the victims don’t have any apparent connection to Blaze (despite his threat) or to the plot. He just comes off as a disgruntled theatre major. The best one is when he dresses up as a priest, presumably to get to the nun he has a picture of, but then he gets distracted and she is never seen or brought up again. Who is this mysterious, lucky nun?!? This is just one of the many, many questions that will never be answered? 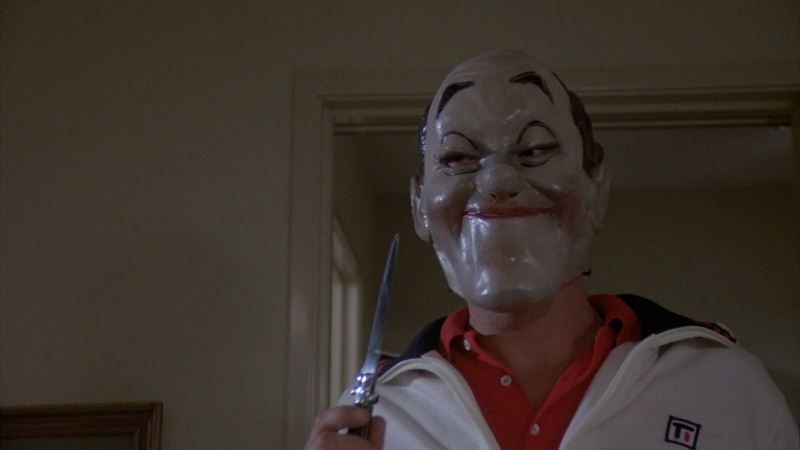 Incidentally, he does wear a creepy Stan Laurel (maybe?) mask for a scene or two, but never while stalking anyone, so it serves no purpose whatsoever. Obviously a producer saw the poster for Halloween and demanded a mask to be thrown in somewhere. They play up the mask to good effect in the trailer, which is proof positive that a talented trailer editor can make anything look like a real movie. The actual murders are pretty pedestrian stuff, mostly stabbings, the occasional throat slitting, one Papier Mache head. The occasional attempt at creativity rarely gels, like when the killer tries to suffocate a woman with a plastic bag but also strangles her at the same time. And then he stabs her. Stick to what you know, dude. The murders lean more to the misogynous side, not as rough as Don’t Answer the Phone, but not a lot of fun (with a couple of exceptions).

All of this leads to one of the most mundane twists ever filmed, followed up with the most obvious twist ever filmed. Don’t expect this to show up on M. Night Shyamalan’s list of inspirations anytime soon. So, basically what I am saying is that New Year’s Evil is not a good movie. I wouldn’t call it completely worthless, though. Its shear shoddiness and incomprehensibility is truly impressive, which is better than being boring. Also, for a movie that came out in 1980, it totally nails 80s L.A. The opening scene of a bunch of punks hanging out of a convertible cruising along Sunset Strip could pass for a Judas Priest video. The killer picks up a victim at a bar by claiming to be going to a party at Erik Estrada’s house. I also like that Blaze’s show is called “New Year’s Evil” and the house band plays the New Year’s Evil theme song. Say what you will, the movie stays on brand.

After an entire movie of ho-hum kills, the killer sets up a ridiculously elaborate death for Blaze that involves hanging her from the bottom of an elevator, hacking the electrical box to remote control it, and trapping up two random people inside the elevator (no clue why). The scheme, which contains the only interesting camera work in the film, ends in failure after a cop shootout. I bet the killer was kicking himself for not just stabbing her.

Surprisingly, this award does not go to the master of irrelevant disguise, but to Blaze’s emotionally neglected, drug-addled, and straight up psychotic son, who is lurking behind the scenes with his mom’s red stocking over his head, a straight pin stuck through his ear, with New Wave sunglasses worn under the stocking. That look takes commitment.

The killer, dressed as a priest, to an angry biker: “I’m a man of God, not a man of violence!”

I cannot overstate how much this is not a good movie. There are enough dangling plot threads to knit a sweater. It is both needlessly complex and thoroughly uneventful. Webster’s Dictionary includes it in the definition of “pointless.” Still, the movie is a great time capsule of 80s L.A. sleaze, and its oddball idiosyncrasies can be amusing. I recommend giving it a try, if there is literally nothing else to watch…and you are very drunk.